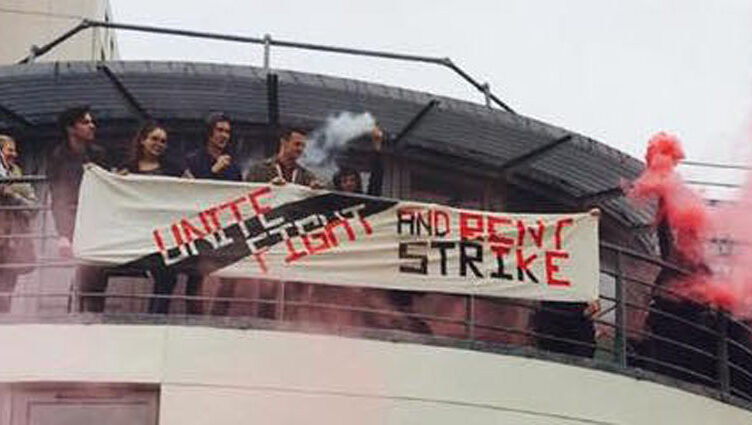 1. First of all, would you like to give us a bit of background to the Gold Rent Strike?

The Goldsmiths Rent Strike is a movement that is run by primarily first year and foundation year students. One of the things this movement, like many other student movements popping up around the UK understands that the way in which rent dynamics work is inherently exploitative and the commodification of human rights such as education and housing must end. These are things in which I wanted to stress as we felt that a lot of the media was framing these movements including ours as just being through the consumer lens. Don’t get me wrong, as we stand as consumers today, we are being ripped off. Halls have been a mess, and Goldsmiths have shown their further lack of care for students’ well-being. We have been subjected to inhumane conditions of halls including the following: black mold, urine filled floors, rat infested halls, broken windows, water leaks, broken showers, broken sinks, and so much more. Students have had trouble contacting mental health services as they’ve been backed up and are just generally underfunded. During the lockdowns students were given no support whatsoever. There have been instances of sexual violence and racism in halls with little to no action by the university, as the lack of support and report systems for these things are severely lacking. This is nothing new for Goldsmiths, for example they literally for a short time cut a project against sexual violence that was run by the SU, and just last year treated black and brown occupiers fighting for anti-racism action in a disgusting manner. Goldsmiths have also lured us here on false promises of hybrid learning, when in reality it’s all been online and we’ve been locked down most of the time. For all these reasons we are striking!

2. And how do things stand now, as we come to the end of the academic year?

At the moment we are just trying to mobilize more and more people to sign up for the strike, while also trying to figure out the legal side so we can understand all of the risks and lay them out to everyone. Also really trying to not lose much momentum for the strike over the break that students are currently on.

3. What kind of structure does the Gold Rent Strike have? Is there an intention to make it a horizontal approach and how do you make sure that often marginalised voices are heard?

A horizontal structure is something that I and a couple of others really pushed for in the beginning of organizational proceedings, as we had about 5-6 meetings really trying to push for a type of direct democracy system which I would have liked to get everyone’s voices heard, however I don’t want to attack anyone personally but we just didn’t and haven’t gotten enough involvement, and a lot of the chats can seem really dead. We’ve decided that an alternative would be to try and come up with an effective delegate system, where literally anyone who wants to be involved can be a part of their halls/buildings within the halls, team that is involved with issues relating to those halls, etc. We want as many people as possible for this, and it’s been actually pretty hard to get people for this. Just so you know we don’t have any official hierarchy, just people who are doing more work than others. I wouldn’t say I have any more authority over anyone in the group. In terms of highlighting marginalized voices we have been trying to do that primarily on our socials as we do have quite a large audience on there. We’ve done Q and A’s asking people to tell their stories in halls, and have gotten many responses which were posted to the stories. We have been contacting people within marginalized groups asking them if they’d want to share their individual stories so we could highlight these issues even further. This has been sometimes hard, as a lot of these experiences are quite traumatic and many people aren’t up for telling their stories. Hopefully we will get some replies and be able to amplify these stories! We have also been trying to make people aware of problems for example, POC staff facing pay cuts and job losses at a much higher rate, as well as just generally how rent is just unaffordable for the majority of the students, but particularly for low income and working class students.

4. There have been rent strikes at other universities and attempts to co-ordinate. What sort of challenges have you faced?

I think one challenge that we’ve faced is acknowledgment of us by Frances Corner ( Editor’s note: Warden of Goldsmith’s and head of the Senior Management Team). We know that the senior management team knows we are striking and is watching our communications closely, however they haven’t tried to reach out to us, and are essentially acting like we don’t exist. Trying to get a public acknowledgement and meeting with them is important even before the strike happens

5. Goldsmith’s organised workers have a reputation for militancy and successful actions. What sort of worker-student liaision takes place?

In terms of this, we have as one of our demands that there be no job cuts and job losses for staff at university because we know how ruthless Goldsmiths is towards not only students, but also towards their workers, and we feel it’s important that we protect them!

6. Have efforts been made to reach out to local Further Education colleges and, if so, what has been the aim of this and the result?

We have also gotten some messages of solidarity and support from lots of staff like academics, cleaning teams, etc. We are definitely looking to get more involved with staffers as we can and need to work together to help bring down the capitalistic machines that these universities have become.

7. Where does the Gold Rent Strike go from here and how can solidarity be expressed?

This rent strike moves forward by trying to get more and more people to sign up and join, making sure we have clear and effective plans if things go south legally (we are hoping and thinking they won’t) and we can redistribute wealth and funds to people who need them the most so no one has to go through any stressful financial or mental situations. In terms of solidarity, I think this is great! Thanks for hearing us out and publishing this! It is much appreciated!