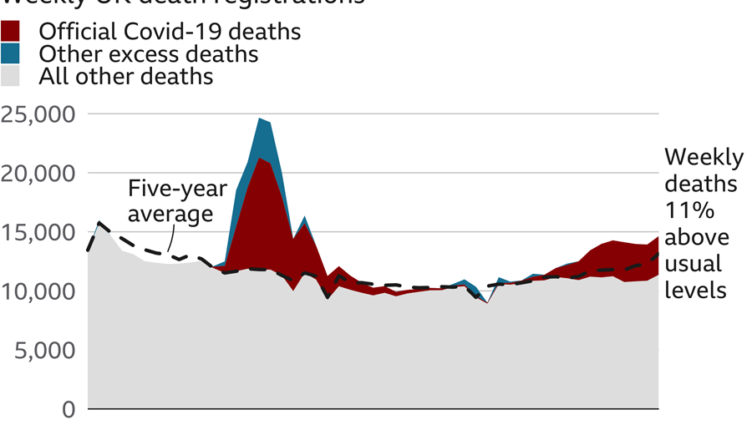 “How many deaths does it take till we know that too many people have died?”

The rapid rise in both new cases and deaths is not a surprise to most. Yet it seems that the government didn’t think it would happen, or preferred not to accept it because it went against their own agenda. Despite the various tiers, it has largely been life as normal for many – schools and colleges open, people still going into work and some carrying on with extensive social mixing indoors. Nothing was done, and though Christmas was scaled down, different households still got together and many people travelled domestically and internationally.

The government and media blame it on a new variant. But according to Independent Sage, this variant has been around since September. It was able to take hold in the population because the strategy has been to contain rather than supress the virus.

“Failure to implement a circuit breaker, recommended by SAGE and Independent SAGE at the end of September, resulted in a delayed a lockdown until November. As a result, a new variant of Covid-19 (B117), since shown to be more transmissible, was given the opportunity to spread widely, particularly in the East, South East and South Wales. It also meant that England entered December with a high number of cases, despite lockdown, and a high number of people in hospital.” (See Independent Sage emergency statement, Dec 2020)

The government has been fiddling about with gestures, closing down certain areas like the hospitality sector and having a system of tiers. But it has not tackled the main sources of the problem, as we have argued on this website for many months: the workplace, which includes schools, colleges and universities. This is of course because its priority is to keep the economy going. It only acts once the situation, already a crisis, deteriorates into disaster. The NHS is now completely overwhelmed and there is no end in sight to the rise in cases and deaths.

The education setting as a key spreader

As we argued in our December 22nd post on the No Safety No Work website, the education sector is one of the main places that the virus is spreading. This is supported by the infections statistics. First it was university age young people, then secondary-age, and now primary-age. Though this age is not likely to get as ill and often doesn’t show any symptoms, they can still spread it. And testimony after testimony from educational staff shows that the safety measures in place are not sufficient. So people are mixing with hundreds of people in the course of the day. Again, this is not just an analysis of working class revolutionaries, these points have been made by scientists for months (see Independent Sage safer schools report featured in the Independent) but ignored by the government.

What is worrying, though, is that the mainstream trade unions have been slow to take serious action. Local universities, colleges and schools may have been doing things, but when researching the December 22nd article, there was little call for action from the NEU in England and even the actions that were taken, eg at Havering Sixth Form College in East London, were not reported on by even the local Havering website. It is only recently that the NEU is calling for action but as of yet no moves to a ballot for united industrial action. Instead they are “advising” their primary school members to not return to work on January 4th – leaving the decision to individual teachers. Though some teachers claim that their schools are safe, most likely smaller schools where overcrowding is not a problem, most would argue that universities, colleges and schools have never been safe and that the context of education – with large classes, difficulties to control students of all ages mixing with each other – makes it impossible to have safe schools without introducing more online learning and much smaller classes. This is all supported by extensive research by Independent Sage (see above link). So why weren’t unions taking action back in September?

The main teaching union in Scotland seems to be doing more to publicise what is going on and has launched a social media campaign (see: EIS website). However, that is nowhere near as powerful as calling for an indefinite strike. Nevertheless, the Scottish government seems to be taking some notice and has just announced that schools will be shut until at least the beginning of February.

If educational staff cannot rely on their union to co-ordinate action, it is up to people on the ground to start organising their own response, something that is already happening in a number of areas. Havering Sixth Form College continues to fight the unsafe demands of management (see East London Advertiser article). They have already had one strike and plan more. There may be many more schools and colleges taking action. It is important that these actions are publicised so that other schools and colleges can be inspired and contribute to a powerful national campaign.

No Safety, No Work would welcome the opportunity to publicise any actions that are going on. Please contact us at safereturn@riseup.net