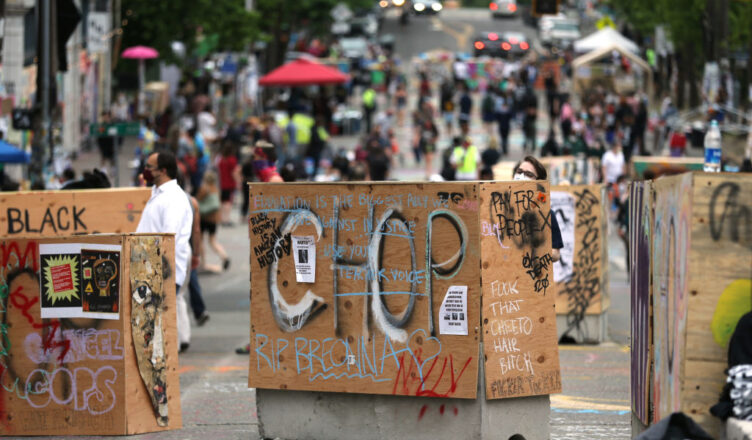 Following weeks of protests sparked by the death of George Floyd at the hands of the police, Seattle saw the creation of the Capitol Hill Autonomous Zone on the 9th of June
The police receded from the Capitol Hill area after several violent clashes with protesters. The opportunity for a demonstration of a police-free community was immediately seized upon. CHAZ was home was to a medical station, a small community garden, and a “No Cop Co-op” in which residents had access to free food and supplies.

KIRO-TV , a Seattle television station owned by the Cox Media Group, reported that on the 15th the name of area had changed to CHOP — Capitol Hill Occupied Zone — in order to better reflect the demands made in relation to the Black Lives Matter protest. The primary demands are: “defund the police”; “have the budget reinvested into community projects”; “drop all charges levelled against protesters to date”.

The full list of demands can be found HERE

On the 20th, reports of shootings in the area began to circulate. It was confirmed that two separate shootings had occurred in the early hours of the morning. One man was admitted to intensive care, and another, Horace Anderson, later died in hospital from his injuries. According to the New York Times a volunteer medic had treated Anderson at the scene and repeatedly called the Fire Department for assistance. The Fire Department did not respond, and CHOP medics transported Anderson to the hospital themselves.

Two more shooting incidents were reported on the 21st and the 23rd, leading to the Seattle Police Chief, Carmon Best, ordering the evacuation of protestors from the area.

The 1st of July saw the Mayor of Seattle, Jenny Durkan, sign an executive order that designated CHOP an unlawful assembly, giving the police department power to invade the area, armed with batons, bicycles and pepper spray, arresting more than 20 protestors in the process. Footage shared on twitter also showed police officers kneeling on the necks of protestors.

Durkan agreed to cut the police department’s budget, but the meagre 5% reduction is nothing near the 50% demanded by protestors.

Public reaction to the establishment of CHAZ/CHOP has been varied. Many that travelled to the occupation praised the welcoming atmosphere, impressed with the network of volunteers that stepped up to run the food and medical co-ops, and took to cleaning the streets and decorating the neighbourhood with protest art. Some of those inside reported a lack of organisation in decision making, and a power struggle between two factions that ultimately led to the name change. Conversely, a group of business owners and select residents have launched a class action lawsuit against the city of Seattle for “extensive harm”, claiming that participants of CHOP have vandalised property and caused losses for businesses. The class action is made up primarily of businesses such as Northwest Wine and Liquor, and Homeowners Associations and Real Estate companies that own or manage property in the CHOP.

The list of plaintiffs hardly comes as a surprise; property owners and management firms stand to lose the most in an autonomous area that empowers renters and marginalised groups. A second lawsuit against the city has now been filed, although attorney Jacob Bozeman has refused to disclose any information about the plaintiffs.

Despite support from the Black Lives Matter movement, mainstream media and politicians in the United States have expressed outrage at the establishment of CHAZ/CHOP. Fox News has even had to “apologise” for their coverage of the area, having digitally altered images of CHAZ, and presenting photographs of smashed windows in Seattle that were taken prior to existence of the CHAZ as part of a slideshow of images headlining an article about the zone on their website.

In a move that shocked no one, President Trump denounced the occupation on Twitter. Trump claimed that “Domestic Terrorists have taken over Seattle, run by Radical Left Democrats” and “Seattle Looters, Agitators, Anarchists and “Protestors”… have ZERO respect for Government… Not good!”

CHAZ/CHOP is not the only autonomous zone to have been established in the US. The Camp Maroon Autonomous Zone in Philadelphia was set up by residents and part of the homeless community to bring attention to the demand for safe and affordable housing in the city. Alex Stewart of the Workers Revolutionary Collective claimed that the community “set up an encampment as an act of protest.”

The recent series of events in Seattle were somewhat reminiscent of the Occupation of Alcatraz, in which the protest group Indians of All Tribes claimed the abandoned Alcatraz Island could lawfully be inhabited by the Lakota tribe under the Treaty of Fort Laramie. The autonomous governance of the island lasted 18 months, but was marred by obstacles from the government, who ordered that the electricity and phone lines to the island be cut off. The island was completely cleared on June 11th, 1971, when government officers forcibly removed the last residents. One of the most prominent activists involved in the Occupation of Alcatraz was Richard Oakes of the Mohawk people. Only two years after the clearing of the occupation, Oakes was shot and killed by known white supremacist Michael Morgan; who was acquitted of the charge of voluntary manslaughter when a jury decided Morgan had acted in self-defence. Richard Oakes was unarmed.