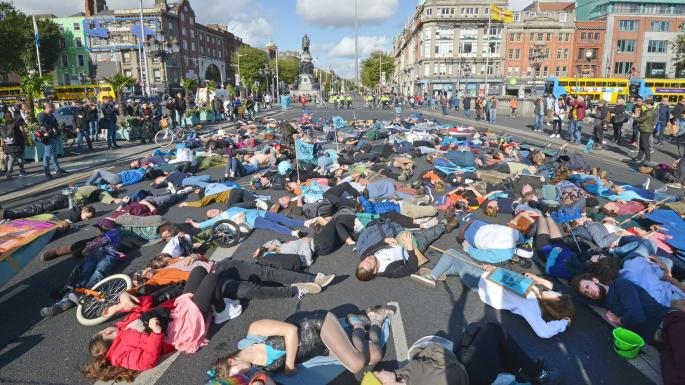 “Any assembly linked to the Extinction Rebellion ‘Autumn Uprising’…must now cease their protest(s) within London (Metropolitan Police Service, and City of London areas) by 21:00hrs [on Monday] 14th October 2019.”

So spoke the Metropolitan Police. The Met used Section 14 of the Public Order Act 1986, which spells out how they can tackle public assemblies. It was a revision of the original Section 14 order which was put out on the second day of the XR protest, which restricted assembly to the pedestrian area of Trafalgar Square. Despite this, XR protestors had spread out to the roads encircling the Square and set up camps on Pall Mall/St James Park, and Whitehall and other areas. The police have used salami tactics to close XR concentrations, starting with the pre-emptive raid on an XR occupied warehouse, where equipment including wheelchairs were confiscated (stolen) and nine XR members were arrested on dubious charges, and then continuing against three bridges occupied by XR, and then moving on to evictions at Whitehall and St James Park. In the process the cops have used increasingly heavy-handed tactics, depriving disabled protestors of their white sticks, power packs and wheelchairs. They have also used “pain and compliance” methods, basically physical assault, against some totally “non-violent” demonstrators.

Meanwhile the Labour Mayor of London, Sadiq Khan, has proved to be at the very least equivocal about the Met repression of XR protestors. He said he was seeking “further information” about the decision to shut down XR whilst blaming them for putting “undue pressure on already overstretched police officers”. In the end he questioned the Met decision to use Section 14. It is interesting that XR was closed down shortly after the protests in the City where banners were unfurled stating “Climate Struggle = Class Struggle”. The decisions to move against XR don’t just involve the leadership of the Met, they involve decisions at the highest levels of the State, including the Boris Johnson government.

Throughout all of this, XR have tried to make out that we should respect the police and government. Experience has shown the falseness of this argument, and that the strategy of “non-violence” is bankrupt. Perhaps the behaviour of the police has opened many eyes about their true nature as an instrument of repression, and that the practical experience of many XR protestors may lead to an increasing radicalisation of the XR grassroots and move it to break with its leadership. This leadership is closely associated with “green” capitalists as we have illustrated in a major article on Extinction Rebellion in our magazine Virus.

The Canning Town action by a minority of XR activists shows that actions should be aimed at big business and the rich rather than at public transport in a working class area of London. It was the targeting of the City which triggered the use of Section 14. Actions that seek to blame everyone equally for the climate crisis are a dead end, and fail to tackle the perpetrator of climate change, capitalism itself. When the interests of big business are imperilled, the State intervenes to crush any threat. It should be obvious that the State will resort to such methods again if there is serious unrest on the streets of Britain, whether they be climate actions that recognise the real enemy of capitalism, or protests against austerity measures. The examples of Chile, Ecuador, Iraq and Lebanon when demonstrators were faced with the barbaric might of the State should make us realise that this could happen in Britain too.