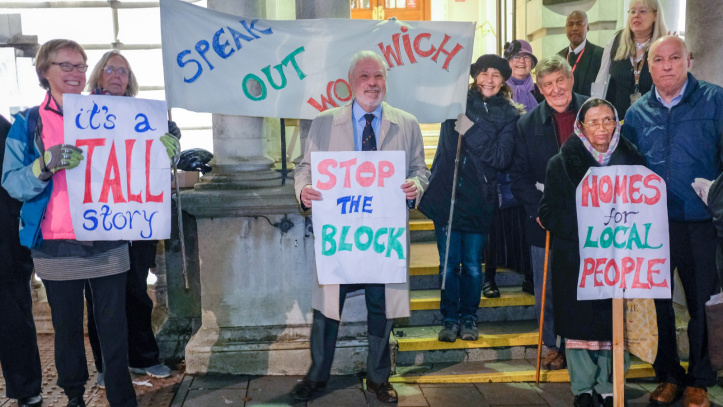 Campaigners are fighting to stop the construction of a skyscraper in the shape of a flat iron in Woolwich. The 27 story tower is the scheme of the property developer Meyer Homes and the tower would include 206 flats all for private sale and NO SOCIAL HOUSING. Greenwich Council, controlled by Labour, has already approved a 245 homes scheme with no social housing in Abbey Wood, and another in Woolwich with 300 homes and only 6% social housing. Labour is just as much to blame as the Tories for the spiralling housing crisis with more and more people being made homeless. The previous Labour leader of Greenwich Council, Chris Roberts, is now a lobbyist for developers and under his leadership many property developer-friendly decisions were made. On top of that the tower will block the light from many homes and overshadow General Gordon Square in the centre of Woolwich and would increase the demand for parking spaces. Under pressure from local group, Speak Out Woolwich, the council rejected the proposal from Meyer Homes.

Meyer Homes will now appeal to a planning inspector to overturn the decision.  Meanwhile in nearby Lewisham, Meyer Homes has plans for a 34 story block. This was rejected by Lewisham Council. Meyer Homes then submitted a slightly modified new proposal whilst at the same time appealing to planning inspectors about the original scheme. Local residents are mobilising against this. Meyer Homes must be strenuously confronted by local people in both Woolwich and Lewisham. The ongoing devastatating attacks on the London working class must be halted.