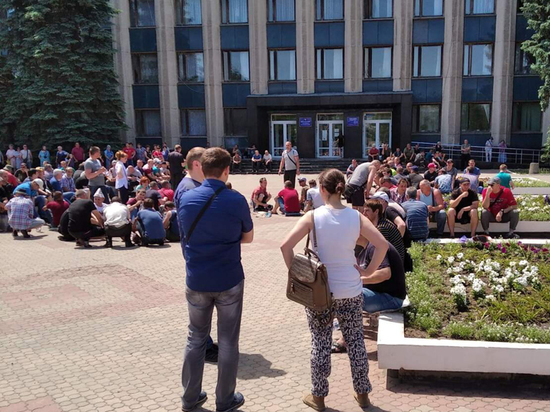 Miners in the separatist territory of Lugansk in Ukraine ended their occupation of the mine at Antratsit on Saturday June 13th. The bosses paid most of their outstanding wages. 119 miners had taken part in the occupation which started on June 5th.

On Friday June 12th, one hundred local people gathered in the main square at Antratsit to support the miners.

The sit-in by 119 mineworkers at the Komsomolskaya mine in the city of Antratsit, which started on Friday 5 June, ended in the early hours of Saturday 13 June. They were paid a large part of the wages they were owed, promised the rest by this week, and assured that there would be no more arrests. The separatist region is supported by the Putin regime and it was clearly worried that the unrest could spread to other mines. Those detained have been charged under article 252 of the Lugansk “republic” criminal code that outlaws “repeated breach of established order, organisation or conduct of assemblies, meetings, demonstrations, marches or pickets”. There are penalties of up to five years in prison.

The mines in Lugansk were nationalised in 2017, but were in fact controlled by a company run by Sergei Kurchenko, a capitalist with links to the former Ukrainian president Viktor Yanukovich, an ally of Putin. After this, wages stopped being paid to miners, setting off the occupation.

More on the occupation here: