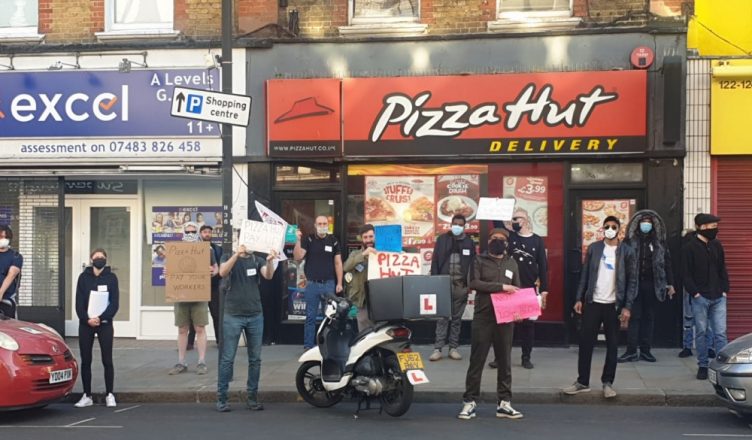 In support of Pizza Hut workers, Croydon Solidarity Network, a mutual aid group of workers around Croydon and Mitcham, called for those able to, to gather outside Lewisham Pizza or Wandsworth Pizza Hut on Saturday, 25th April at 5.30pm. At the Wandsworth site, police issued pickets with a penalty warning notice, and they had to disperse. The Network tweeted: “We’re not going to let the police’s actions ruin today. They act for the ruling class, we act for the working class. Thank you to everyone who came down to show their support!!!”

Pizza Hut workers across several stores owned by the ATEAM franchise have not had their wages paid in full for several weeks now. On 22nd April, 25 people, workers and supporters gathered, 2 metres apart, at Pizza Hut Penge, an amazing show of solidarity in these uncertain times.

Despite numerous emails, phone calls and social media posts in the week leading up to the action, only a small number of them have been paid in full. Some workers have only received part of their pay and others have yet to be paid any of the money owed, and neither the franchise owner nor Pizza Hut have furloughed anyone.

For those who would like to show support from home, Pizza Hut can be reached at @pizzahutuk and @pizzahutdeliver on Twitter (use the #PizzaHutPayUp hashtag), or on their Facebook page.

And invite your friends!!