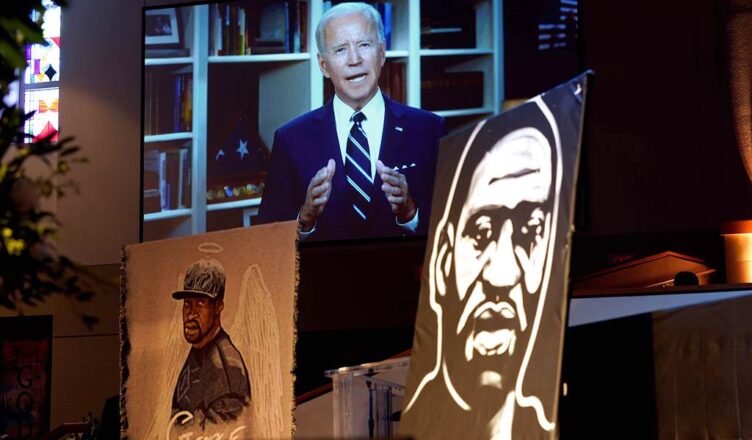 The appalling murder of George Floyd by cops in Minneapolis ignited a movement that was a long time coming. Demonstrations spread like wildfire throughout the United States, involving many thousands of people. It is a movement that is multicultural and multi-ethnic, involving people from all genders. Demonstrations took place in 806 cities and towns, in all 50 States and in the American-occupied territories of Guam, Puerto Rico, and the Virgin Islands.

What this movement has highlighted is the role of the police as the State agents and enforcers of the rule of capitalism and of a deeply racist agenda. Debates about the continued existence of the police are now being discussed openly, in hitherto unheard of developments, with calls for defunding and for actual abolition of the police. This increasing disenchantment with the police was triggered by the hundreds of murders carried out by the police and by the increasingly aggressive attacks on demonstrations by cops, which have radicalised many participants. This mass movement is of course feared by Trump, but also by large sections of the ruling class who do not see eye to eye with the President. This includes the Democratic Party which is frantically trying to co-opt and tame this movement, moving it away from direct action and street mobilisations towards voter registration and a vote for Joe Biden in the forthcoming election in October.

The State and ruling class in America responded at first to the murder of George Floyd by a denial. When people took to the streets, at first in Minneapolis and then Stateswide, the State responded with beating with batons, smoke grenades, pepper spray and pepper pellets, tear gas and rubber bullets. This failed to deter the demonstrators, who came out day after day to defy police brutality. People were beaten, injured and blinded by the police. Curfews were put in place, many by Democratic mayors, and the media and various officials went into action by maligning demonstrators. In many States the National Guard was mobilised to back up the police.

Trump attempted to mount a military response which failed, partly because sections of the military leadership were opposed to igniting a civil war for which they were not prepared.

Trump is now deemed by many sections of the American ruling class as no longer useful. In this situation, the fire brigade of social unrest, the Democratic Party, swung into action, with its allies in the black establishment.

The Democrats are making vigorous attempts to defuse the movement. Rejecting demands for police defunding and abolition. Biden is calling for mild reforms of the police, including increased hiring from minorities. Alongside him, Bernie Sanders, the so called “radical” loved by many leftists in the USA and here, is also opposed to defunding and abolition, falling in behind Biden.

The Democrats’ increasing grip on the mass movement was apparent with the appearance of Biden at George Floyd’s funeral.

Alongside this, we have seen the panic now coursing through the police, who fear resistance to their authority and to calls for abolition. The sight of cops taking the knee is a sign of this panic, as they attempt to play the old “good cop” shtick, when they are part of a repressive and racist institution.

Not since the 1960s has such a movement emerged in the USA. The rising rate of unemployment aggravated by the coronavirus epidemic, has contributed to the mass nature of the movement and the anger seen on the streets is in part due to increasing awareness of the nature of the capitalist system. It must resist all attempts to divert and tame it. Power is on the streets, not at the ballot box. The logical extension of this movement must be towards the dismantling of the whole stinking system, and that is what we as revolutionaries, as anarchist communists, must argue for.