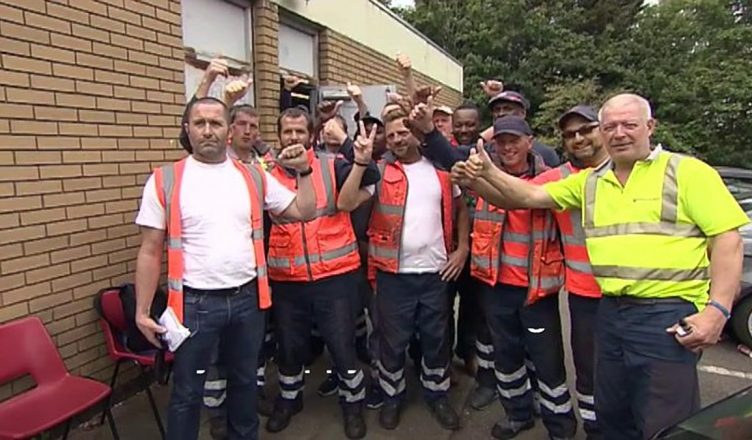 Bin workers in Birmingham went out on strike on Tuesday February 19th and are due to strike again on Friday 22nd February. Up to now workers have been on a work to rule in response to treatment by Birmingham’s Labour Council. The strikes will be for two days of the week for five weeks and involves 300 workers.

In 2017 the bin workers went out on strike for three months against the Labour council’s plans to sack some workers and force them to reapply for lower paid jobs. The council was forced to back down but at the same time the trade unions accepted a deal with new conditions and longer hours.

Since then it has been revealed that the council struck sweetheart deals with members of the GMB union who did not join the strike, awarding them as much as £4,000. Those who had taken strike action were not offered this paydeal, effectively creating a blacklist.

This Labour Council attempted to get a court injunction to stop the strike, using legislation passed by a Conservative government. At the same time they used an “alternative workforce” strike breaking group.

In response equal payments for all workers were demanded. The Labour Council responded by refusing holiday leave. At the same time they ran a hate campaign in the media against the bin workers.

Meanwhile care workers employed by the Council were due to strike on the weekend of February 23rd-24th. This is in response to the Council’s plans to cut jobs and working hours. This would mean cuts of up to £4,100 a year for jobs that are already badly paid.

In addition to taking strike action, workers are leafletting in wards of councillors who backed the move, targeting the ward of the deputy council leader Brigid Jones this Saturday. The leafletting has met with much support from local residents.