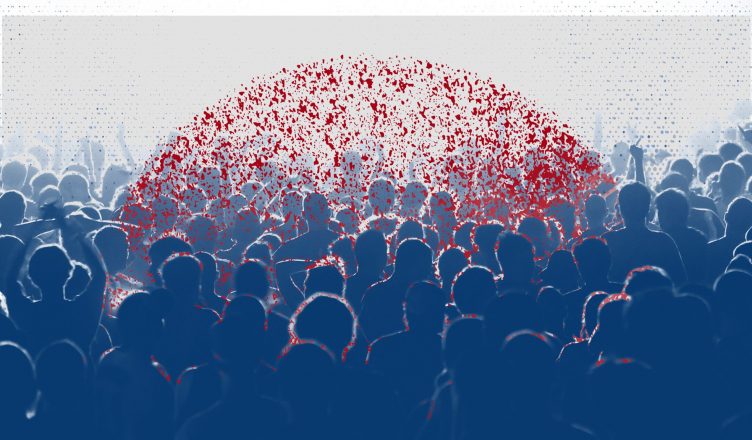 At the end of February a private event took place at which Dominic Cummings, Johnson’s chief adviser, unaffectionately nicknamed the Gollum, summed up the then current approach of the government on coronavirus. Those who attended described his position as “herd immunity, protect the economy, and if that means some pensioners die, too bad”. A “senior Conservative source” was quoted as describing Cummings’ views as, “let old people die”.

This policy of herd immunity, which means allowing the virus to spread through the mass of the population fairly quickly and in the process allegedly establish mass immunity to the virus, is basically an experiment in eugenics. Wikipedia describes eugenics as “a set of beliefs and practices that aim to improve the genetic quality of a human population, typically by excluding people and groups judged to be inferior, and promoting those judged to be superior.” This means eradicating the elderly, the ill, the disabled for the sake of a supposedly healthier population. It was horrendously applied by the Nazis in Germany to murder people who were mentally or physically disabled.

On March 11th David Halpern, chief executive of the government’s Behavioural Insights Team and a member of the Scientific Advisory Group for Emergencies, persisted with the herd immunity approach. Then on March 12th Patrick Vallance, the chief scientific adviser of the Johnson regime, and Chris Whittle, chief medical officer, stated that herd immunity would be established once 60% of the British population had been infected, with social distancing and washing of hands easing the pressure on the health services. Community testing and contract tracing would end immediately.

They were proved totally wrong. If you look at what they meant, around 40 million people would be infected by the disease, with between 200,000 and 400,000 dying. Within three days the Johnson regime changed its position, moving to suppression of the coronavirus. This was because of advice from government mathematicians who, taking the example of Italy, where 30% of those infected by the virus ended up in intensive care, saw that the NHS would not be able to cope with the crisis.

The Johnson government thought that coronavirus would behave like flu. However, the death rate from coronavirus is much higher, and unlike the flu, it is not seasonal. Without extensive testing, contract tracing and community surveillance, it will flare up again after the end of a lockdown. Social distancing will not be enough to control the virus. In China, after initial lockdowns and quarantines, thousands of community workers mobilised behind a national testing programme and mapping of infected people using case definitions based on symptoms of the virus.

Without this approach, the coronavirus will continue to spread in the UK despite social distancing and lockdowns. China managed to suppress the transmission of the virus in less than two months. There is no sign yet of this happening. Despite eight weeks’ notice, Professor Neil Ferguson of Imperial College, acting as a governmental adviser, said that community testing and contact tracing was not possible because enough tests were not available.

All of this reveals a callous, cynical and coldly calculated approach to the elderly, the sick and infirm and the disabled, and is reflected in the lack of concern about provision of protective equipment for health workers, shop workers, cleaners and bin collectors. This approach has been shown to be widespread within the government, local government, among bosses and landlords.

The attitude that it would be better if a few hundred thousand elderly and infirm people were sacrificed to preserve the economy and the profit system is still visible among spokespeople for the ruling class. The vile Sherelle Jacobs wrote in the Daily Telegraph: “Through this ‘herd immunity’ strategy, a resurgence of the virus after it had seemingly peaked would be avoided. Championed by Dominic Cummings, the approach was creepy, clinical and completely correct”. She went on to say that Johnson “should pay heed to Trump, who is raring to get America up and running by Easter lest the cure be worse than the disease. Premature, perhaps, but at least he is forcing Americans frankly to debate the trade-offs: millions of livelihoods versus thousands of lives”. Well, that statistically would mean not thousands, but two million people dead in the USA.

The perhaps even viler Toby Young, a champion of eugenics, wrote in the Conservative magazine The Critic: “Like a growing number of people, I’m beginning to suspect the Government has overreacted to the coronavirus crisis. I’m not talking about the cost to our liberty, although that’s worrying, but the economic cost. Even if we accept the statistical modelling of Dr Neil Ferguson’s team at Imperial College, which I’ll come to in a minute, spending £350 billion to prolong the lives of a few hundred thousand mostly elderly people is an irresponsible use of taxpayer’s money.”

Young runs a number of free schools and refuses admittance to disabled children on the grounds that they are, in his own words, “Troglodytes”. These are views widespread within the ruling class, rather a few hundred thousand, a few million dead, than sacrifice Profit.

Ashton Applewhite, author of the book on ageism This Chair Rocks! wrote in a recent article that “Where does ageism enter in? In suggestions, mostly on social media, that since ‘only old people’ have been dying from this coronavirus in significant numbers, the rest of the world needn’t be too worried about it. Even worse, in suggestions of setting an age limit for medical treatment, so it won’t be ‘wasted’ on people less likely to survive. A public health emergency can indeed make it necessary to allocate resources by health status. That’s triage. Allocating resources by age, under any circumstances, is not triage. It is ageism at its most lethal.” She proceeds to say: “In some quarters the AIDS epidemic was considered divine retribution for sinful behavior. Shamefully, many of those most at risk, already marginalised by homophobia and racism, were overlooked and even left to die. Doing the same to those marginalized by ageism—the corrosive belief, at its ugly heart, that to age is to lose value as a human being—is just as reprehensible. It is not ethical, or legal, to allocate resources by race, gender, or sexual orientation. Doing so by age is equally unacceptable. Period. No one deserves to be sick. Everyone deserves respect and care. Viruses infect everyone. Humans shouldn’t discriminate either. The way we respond to a challenge, especially a fearsome one, shows who we truly are, as individuals and societies. There’s nothing like a global pandemic to prove that we’re all in this together. Let’s act like it, in solidarity across age, race, and borders.” She concludes that “Capitalism Kills”.

The writers of this article, as pensioners, reject the concept that the elderly should be sacrificed for the sake of the economy. The coronavirus highlights the class antagonisms in this sick society, the callous outlook of the rich, exemplified by Branson, Bezos and their ilk with their insatiable greed for more wealth. It also highlights this society’s attitude to the elderly, seen not as human beings, with relations and friends who love them, but as a drain on the economy.

In any case, there is no need for people’s livelihoods to be sacrificed. There is plenty of wealth in the world. What needs to be sacrificed is the wealth and profits of the privileged few, the large corporations and the banks.

Governments, in the aftermath of the coronavirus pandemic, will try to claw their profits back by further attacks on our living standards and benefits. Pensions will continue to be a target, unless we organise among pensioners and as a class to stop them.