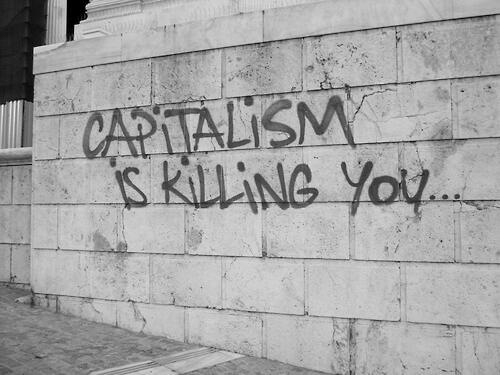 We seem to be living in unprecedented times. With the world teetering on the edge of either the collapse of the financial system or environmental collapse, along comes this new coronavirus. A global pandemic has slowly forced the capitalists into almost becoming state socialists such is their desire to prop up this calamitous system that only benefits a wealthy, greedy minority. Hundreds of billions of dollars is being created through quantitative easing and other desperate measures whilst the UK government has said it will pay up to 80% of worker’s salaries if you are laid off because of the nationwide shutdown of non-essential services.

There must be some panic at Whitehall pushing the Tories along this path, their biggest fear right now is thousands of unemployed penniless people seething in anger, and where will they direct that anger? The panic buying, the flouting of rules concerning social distancing, the hordes of people taking advantage of the closure of pubs and restaurants to go sightseeing, isn’t that surprising is it? This pandemic is serious, and will force people en masse to think about reality in ways they have never had to do before. Generation after generation of rampant advertising has created a consumerist sensibility in many that won’t simply drift away; there will be teething troubles as we give birth to a new restricted world. How many weekends of no pubs and football will it take before we see the first signs of social disorder and violence? A nation of selfish consumers will soon get tired of their huge food stock piles and Netflix, surely the human mind craves more deeper fulfilment?

At the start of this crisis there were about 4,000 intensive care units throughout the UK, with about 8 out of 10 already occupied, this seems pathetically small in light of current events with a population of over 60 million people. Are we surprised? Over a decade of cuts to the NHS and other front-line services has clearly exacerbated the situation. At some point people might start thinking about this link when their grandparents die in a corridor waiting to be seen. And this is all Covid-19 is to Boris Johnson and his ilk, a numbers game. The elites that run the UK deep down don’t care about elderly or vulnerable people dying, if they did then they would have been investing in essential services for this group of people the past ten years and more. No what they are worried about is how this might look. They are terrified of stories about health professionals being forced to make brutal triage decisions that mean many will die from a lack of capacity, nothing else. Nature’s brutal ‘cull’ in the eyes of the Tories will simply mean less money to pay out for people that cannot contribute to society anyway, and the plunging stock market indexes simply mean to some that we are now entering a ‘bear market’ which means certain stock items are now nice and cheap, a good time to buy!

This is the mentality of the Ruling Class

But there is a glimmer of hope, and that as always lies with ordinary people. The fragility of the System and the illusion of its stability has been laid bare in ways that ceaseless activism could not. We are seeing Mutual Aid groups spring up in local communities across the UK as crisis sparks compassion in many who want to help out and reach our most vulnerable, our isolated, the many left behind by successions of uncaring governments. Our ‘way of life’, this sick consumerist culture that is squeezing the life out of the world has been savagely attacked, ironically by a new disease. Planes are grounded, traffic is greatly diminished, the world takes a breath from decades of abuse inflicted upon it. People are forced globally to take stock of their lives and to think about what really matters to them, close family, friends and their communities. Of course there will be those who yearn for things to ‘go back to the way they were’, but hopefully there will be many who are now questioning basic assumptions about capitalism, the money system and the priorities of the Ruling Class. People will ask themselves, ‘Why were we not better prepared for this?’

As the world continues to struggle to contain this virus, governments and other powerful corporate groups will struggle to contain their urge to be selfish and destructive. The only reason they are acting in a humane fashion is because of the pressure from below. They dare not do nothing because for decades they have attacked the very services that are most needed now. As people work from home and socialise more with their neighbours, they might just question why things would need to go back to the old ways of doing things, when there is a much brighter positive society within reach, if we simply use this time to think!