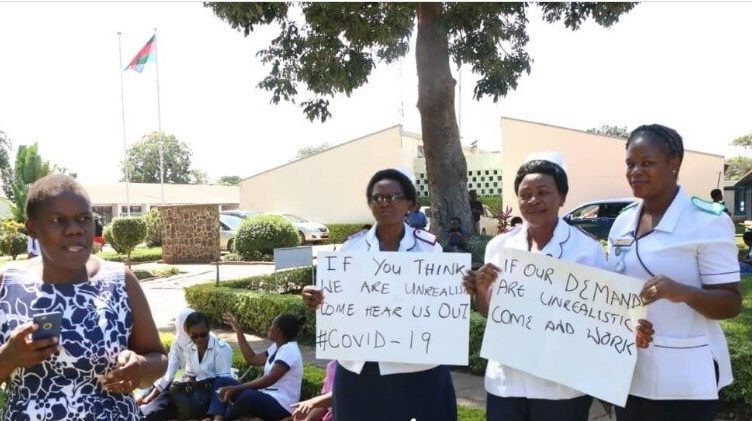 Workers at Gartex, which makes ready to wear clothes, went out on strike for two days after the company refused to negotiate over a two year period after two union activists were fired. Workers have been concerned over health and safety conditions for a long time.

Gartex then sacked 56 workers in February 2020. The failure of negotiations resulted in the strike on 13th and 14th of May.

Gartex, which employs 1,000 workers, is owned by German company Gardeur.

Workers at Amanor, a subsidiary company of the French-owned Veolia, which supplies water, refuse, recycling and energy services, have been on indefinite strike since January 20th. Amanor bosses pulled out of collective bargaining over payments for rotation of shifts. They then fired 500 workers. In response workers demonstrated at various Amanor sites.

Public sector workers went out on strike from May 5th to May 8th over coronavirus payments, and the payment of pension arrears. This included a sit-in strike by firefighters.

Health workers at two private hospitals in Durban, in Natal province, went out on strike over non-provision of PPE equipment. Meanwhile bus workers employed by Golden Arrow went on strike on May 7th for similar reasons. A hundred workers threw up a picket at the bus depot in Capetown.

Binworkers in Bordeaux went out on strike from 11th to 15th May over the payment of a bonus, returning to work after management gave in.

Workers working in the meat packing and processing industry responded to the dangers of coronavirus with strikes in California, Georgia, Nebraska and Iowa, forcing the closure of factories. Trump then used the Defence Production Act, dating from World War Two, to reopen the industry. Workers at a poultry factory in West Columbia, South Carolina then went on strike in May over lack of social distancing.

Meanwhile fruitpickers in the Yakima Valley in Washington State went out on strike over coronavirus concerns at four fruitpacking firms. Workers demanded a $2per hour hazard payment.

At Brentwood Originals pillow factory in north Mississippi, workers, mostly black women, went out on strike on 11th May over concerns over management cover up of the case of a fellow worker having contracted the virus.