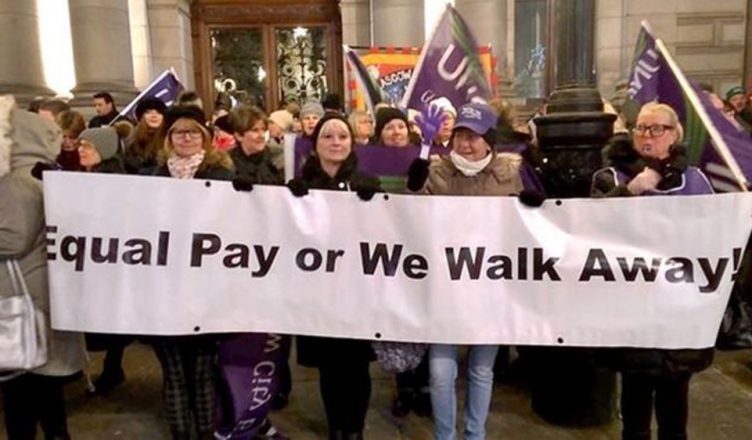 The following is a summary of the talks and discussion on women organising in the workplace at the ACG dayschool in October.

The session was led by two women, both very experienced in organising at work.

Meena from the Angry Workers

The Angry Workers is interested in promoting collective organization in west London. The strategy includes getting jobs in the bigger workplaces, building solidarity networks in local areas and producing a newspaper (2000 copies).

Meena works in a ready-meal factory, with up to 4000 workers across four sites in Park Royal, west London. She started three and a half years ago working on the assembly line but then managed to get a skilled job as a forklift driver, one that is normally done by men. She is now ‘permanent’ and a GMB rep. The workforce consists of 60% women with a wage grading system that sees women largely occupying the ‘unskilled’ grade. E.g. all the women work on the assembly line which is actually the hardest job.

Jenny from the ACG

Jenny has been a union activist since the early 1970s. She was in NUPE which then was the union for public sector employees, now Unison. One of their first jobs was as a school auxiliary worker. These jobs were all women. There was a dispute and all the women came out (Jeremy Corbyn was then the full-time official!). Then she worked in the parks department and got involved in the GMB which had no particular structures for women.

The session focused on three main questions. Each speaker addressed the questions.

1. What are the issues facing women at work that are distinct from men? (Obviously they will have a lot in common but there will be issues related to the gender division of labour as well as the fact that often they have domestic duties and most likely will be the ones with

Frist we have to understand that it is not so simple to lump all women together because in the types of jobs I’ve done over the last 6 years (low waged sector), the two main divisions within the workforce are temp/agency workers, and your migrant status (British born vs. migrants).

In terms of gender though, the main thing you notice is how segregated the labour is – men normally do specific jobs in warehouses and factories, even though, often, there is no real reason for this, more of a cultural thing. For example, women work on the assembly line and men do the heavy lifting, drive trucks, operate machinery and do the electrical stuff. Middle and upper management are men and men also do the surveillance.

The assembly line work is very hard and this creates many problems for women.

But this job is classified as unskilled when it comes to pay negotiations.

Other problems women face, not completely related to gender, include the problem of lack of confidence and general bullying. They are reluctant to put in a grievance, partly related to the fact that the job you do is not respected but the women also worry that their English is not good enough. Men have all the power- making decisions about holidays, overtime, moving people between departments etc so you have to have a good relationship with your manager.

While all women, regardless of their job, may suffer sexual harassment, I would say it is more likely to happen in low waged, low status jobs and the nature of these job (in terms of how the work is organised, what status it has, how much you get paid), does have a worse impact on:

I don’t want to do some kind of oppression olympics or something, but the fact is that in my workplace, you can really see how the job itself beats you down and that in turn affects women’s ability to see themselves as full members of the working class which in turn affects their level of engagement in unions or organised work activity.

You can’t tackle harassment without changing the work itself – less stress, less hierarchy, more autonomy at work. The question is less, ‘why do men abuse women?’ but more, what social and material conditions are required to reduce men’s ability to abuse and gives more power to challenge it? It’s not just about changing behaviours.

However, the situation is more nuanced; women aren’t all just passive robots. There are examples of collectivity e.g. it was women who organised a big petition against irregular hours at a sandwich factory in Southhall and they all walked-out when they weren’t given an extra break during overtime.

You do also get demoralising cases though like the woman weeing herself and nobody intervening when she wasn’t allowed to go the loo. Not only was that manager a woman, she was also supposed to be a GMB rep!

This points to intersectionality limits; actually low paid men and women have more in common than women across class lines.

The other issue that is a distinctive issue for women is the home situation, which will be different from men’s. I am talking in a specific context of low-paid manual labour jobs, often majority migrant labour, so women’s lives in these jobs are generally tougher. They have a lot more on their plate in terms of juggling the normal ‘women’ things (childcare and domestic labour) without any recourse to paying their way out of their problems, as well as additional disadvantages like bad housing, poor English, more gendered expectations from their own cultures like cooking the dinners. Family is the thing that bridges the gap that money can’t. This is a double edged sword – you need your family, at the same time, it can confine you even more.

Women are often not considered to be ‘proper’ workers; they are seen to be working for ‘pin money’. This is the case with the school auxiliary workers. Yet many of the women are single mothers and very much rely on the wage. But the low wages not only make life difficult but give low self-esteem. The common experience of all working together and experiencing similar issues did make for good solidarity. A lot of women got angry and took action.

In the Parks Department, gender issues relate to the fact that often there is a refusal to accept that there are women working there and that there are some differences that need to be taken into account. For example, there are issues with lifting heavy weights. But also, the protective clothing was all in men’s sizes, e.g. gardening gloves. Also the rip cord on the mower was too long so that it can lead to back injuries. In other words, the organisation of the job assumed it would be a man doing the job and women just had to adapt.

There has also been so many cases of sexual harassment that are never taken up.

2. What obstacles/difficulties  women face when trying to organise? Are men sometimes an obstacle? Are women’s needs accommodated for?

General points from speakers and audience

Issue of life outside work for women

Unions and role of men at work as an obstacle

3. What strategies have been adopted? What ideas do we have for ensuring that women are fully represented in the class struggle?

A key issue are the gendered division of labour in which unequal pay and roles are systemic. This is difficult to challenge due to attitudes of bosses, managers and male and female workers themselves.