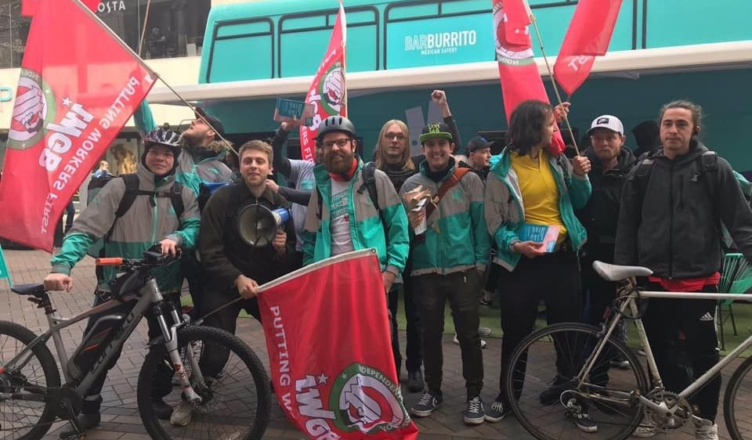 The online food delivery company, Deliveroo, have fought every attempt at self-organisation by their couriers since around 2016. Unions such as the Independent Workers of Great Britain (IWGB) and, in some regions, the Couriers Network of the Industrial Workers of the World, were active in defending the rights of some of the most precariously employed workers in the UK. And with some success. Through a combination of militant and imaginative tactics and extensive legal work, the IWGB has been at the forefront of Deliveroo courier resistance for the last 7 years. Deliveroo have tried to marginalize the small IWGB, which remains unaffiliated to the Trades Union Congress, but the union has continued to organise and remains a thorn in the side of the company.

However, the GMB union, has come to their rescue. The TUC affiliated GMB has a reputation for recruiting any and all groups of workers. Whilst, they have a long standing and significant presence in local government, the NHS and the education sector, they have, unlike several other large trade unions, attempted to recruit in ‘greenfield’ sectors – organising the unorganised and groups of precarious workers that are often considered by other trade unions as too expensive to organise and support in a sustained way. However, the GMB is not particularly interested in actually organising workers, particularly not through building workplace organization and power. Rather, they use the rhetoric of organising in order to recruit whilst entering into negotiations to gain recognition from employers. They then ‘service’ the new membership for a period. This creates a steady revenue stream to sustain their paid officials, their workforce and their infrastructure.

The GMB signed a deal with Uber in 2021. The IWGB, which also organises amongst Uber drivers, claims that this has made no palpable difference to Uber drivers as a whole. Now, the GMB has become the recognised union for Deliveroo couriers, despite previously having no significant presence amongst couriers. The deal with Deliveroo has been to marginalise the IWGB and to attempt to guarantee a peaceful co-existence between couriers and themselves. The IWGB has described unions like the GMB as “yellow-bellied” and “a hollow and cynical PR move” (IWGB Press Release May 12 2022).

In some ways, whilst the IWGB remains a ‘fighting union’ with an emphasis on rank and file activity, there is always a tendency for even militant unions to become just another part of the machinery of exploitation. The important thing is that workers, unionised or not, organise their own struggles and keep control in their own hands. The GMB Deliveroo partnership is a reminder that when workers are putting up a fight, trade unions can be brought in to crush militancy and restore social peace.