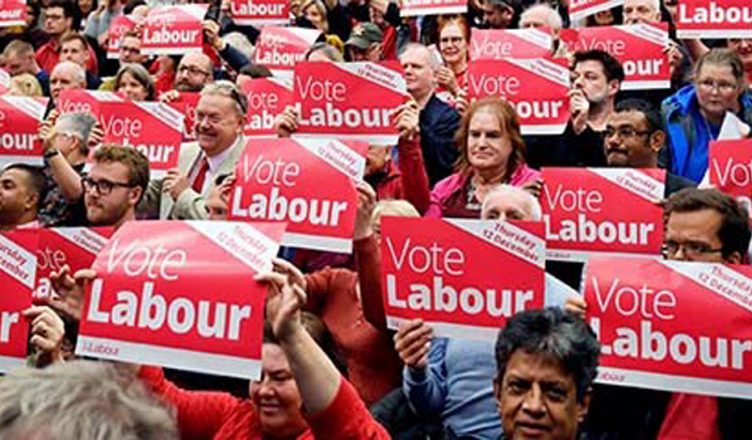 You would have thought that the major defeat for the Labour Party would be a strong signal to rethink a strategy that relies on electoralism – getting the right party with the right programme into power. However, rather than arguing for people to throw themselves into struggle against both capitalism and the new Johnson government, many of the Corbynistas haven’t given up hope for the transformation of the Labour Party.

Some will blame Corbyn himself, at one time their saviour, and call for a ‘better’ leader – one that somehow will be successful where Corbyn was not, maybe someone stronger, a woman, a northerner. They will spend their time struggling in Constituency Labour Party branches to oust more Blairites and pushing for a more radical programme at Labour Party conferences. There were problems with the strategy of Corbyn and his circle, such as not really building a mass movement of support that went beyond the LP itself and the leadership of some trade unions, not creating an independent hard copy media to counter the propaganda of the right-wing press, backing down on a number of issues such as nuclear submarines, or not dealing effectively with the right-wingers in the Labour Party. But could he have done things any differently? What do people, many who claim to be socialists, communists, anarchists expect from the Labour Party?

In many respects, Corbyn was a very good leader, a mild-mannered career politician who worked for his constituency, came out at the right demos, voted for the right things – the token Leftie in the Labour Party. He was honest and a ‘nice’ man. He then found himself as leader of the party – not something he had aspired to or expected. It was a fluke he got nominated and won. And then look what he managed to achieve in terms of Left electoral politics objectives. Hundreds of thousands of people joined the LP making it the biggest social-democratic party in western Europe. Groups like Momentum and The World Transformed brought in more and more activists. He successfully fought off numerous challenges to his leadership from the Labour right and managed to pull off an increase in the Labour vote in the 2017 election. The manifesto for the 2019 election was certainly the most radical the Labour Party had put out in decades, such as building millions of homes for social rent, stopping the sale of public land, stopping funding for private education, scrapping universal credit. Blaming Corbyn and thinking that someone else will be more successful is a delusion.

Some will also point to the circumstances in which the election took place. The campaign did try and focus on the important issues of austerity, housing and inequality, but Brexit loomed large in most people’s minds. Corbyn is being blamed for not having a clear position. But given the divisions in his party, what position was he meant to have? A large part of the party, including many of his most Left supporters were in favour of Brexit and the rest were strongly in favour of Remain. It was impossible for him to have a position without alienating one section so he ended up in many ways alienating both.  But again, this is the nature of electoral politics.

Johnson got lucky by calling the bluff of the Brexit Party. Instead of facing competition, he managed to gain most of their votes, thus was in a much stronger position than Corbyn who had the competition from the Lib Dems and couldn’t count on Scotland at all. Johnson got 43% of the popular vote – which was probably around the same number who would have voted for Brexit in a referendum. Plus, he would have got votes from those who were just fed up with the whole thing and didn’t like the idea of things dragging on with a second referendum. If the election had taken place once the EU issue was decided, the outcome might have been quite different.

Corbyn also had to endure four years of defamation and demonising at the hands of the vast majority of the mass media. The accusations of anti-Semitism were clearly planned in order to derail his potentially pro-Palestinian positions and it is hard to fully refute as there will always be some anti-Semitism wherever you choose to look. The right wing of the Labour Party helped with this attack on his credibility, undermining him at every turn for the past four years. It is surprising that he actually got any votes at all!

The conclusion to draw from this is not that we need more of the same strategy – that if there is a different leader in different circumstances, real social change can be brought about through a government. Instead, we have to recognise that despite all the strengths of the leader and the programme, the Labour Party lost to a dishonest, upper-class, unpredictable, right-wing bigot. And this happens again and again. Having a ‘better’ leader, a more ‘radical’ programme, or more favourable circumstances will not make any difference next time. The same sort of things will happen. The ruling class will do everything in its power to ensure that the rule of capital continues on their terms.

The only thing that would make a difference is if there was an autonomous mass movement for social change – one that was already active in the communities and in the workplace. This movement would not be focused on electing a particular party but on the class struggle itself, both material issues and the battle of ideas, like anti-racism and anti-nationalism. The election of a ‘progressive’ party would be on the back of this. The ruling class may even prefer such a government as a way of quelling unrest. However, if you spend all your time actually neglecting class struggle, focusing on debates in the LP itself, then it will be difficult to build such a mass movement.

In case this point seems to give hope to those who think having a progressive party as the result of a mass movement is going to usher in major social change, this is not the intention! We did not get the chance to see what would have happened if Corbyn had won. Even if you do manage to get someone in who sincerely wants to introduce a programme of social transformation, they will not be able to do it because of the nature of the relationship between the State, capitalism and the government. If the mass movement is strong, certain reforms will be put in place, especially if they make it easier for capitalism to continue to function. But this will be as far as it goes. It has nothing to do with how sincere or well-meaning the leaders are. People make the mistake of thinking that these politicians are lacking in some kind of moral qualities. Though many are, it doesn’t matter in any case. The system will force even the most radical politician to back track and even reverse the initial programme that they were elected on. Look at Syriza in Greece. They were soon introducing new austerity measures under pressure from the EU and their capitalist backers.

The behaviour of past left Labour governments also gives an indication of what happens. Between 1945 and 1951 the Labour government showed itself to be clearly on the side of the bosses. Striking dockers, miners and lorry drivers were denounced, spied upon and prosecuted. The government used strike breakers, often with the support of the unions. Troops were sent on 18 occasions to cross picket lines and take over the jobs of strikers. Why would a Corbyn government, desperate to protect their credibility with capital, be any different?

Unfortunately, there are now many ex-Corbynistas who are advocating this strategy- building the social movements and organising in the community as part of a long-term plan to elect a progressive Labour Party. A recent meeting of the new group Labour Transformed highlighted the failure of LP activists to successfully build a mass movement in support of Corbyn, arguing that there was too much focus on canvassing and internal party activities. While we welcome people getting involved in struggles and community organisation and resistance, the reasons for this are highly suspect.

“As a potential solution, community organising models have been a big part of the discussion at Labour Transformed and elsewhere. This could see Labour members more involved in existing community projects helping to sooth the immediate issues many working class and marginalised communities face. Activists can then help build organic leaders and develop them into advocates (or candidates) for a Labour government in the long term.” (Link)

There are no short-cuts to revolutionary social change, no substitute for building up an effective revolutionary movement. Our tasks have not changed with the defeat of Corbyn and the victory of Johnson. Though the possibility of change may appear dismal, it is important to remember that no matter who’s in power, it is the strength of the movement that counts.

Electoralism is a bankrupt and debilitating strategy for the working class. Governments have little autonomy from the ruling class and the electoral farce is just a way to make us think we have some kind of power, distracting us from the real struggle. It is capitalism which determines how things pan out in the political sphere. Getting a progressive party into power can never achieve more than very minor reforms. And, given the situation for both the planet and the working class, it is imperative that change is fundamental and revolutionary; this means destroying capitalism and creating new economic, political and social structures.