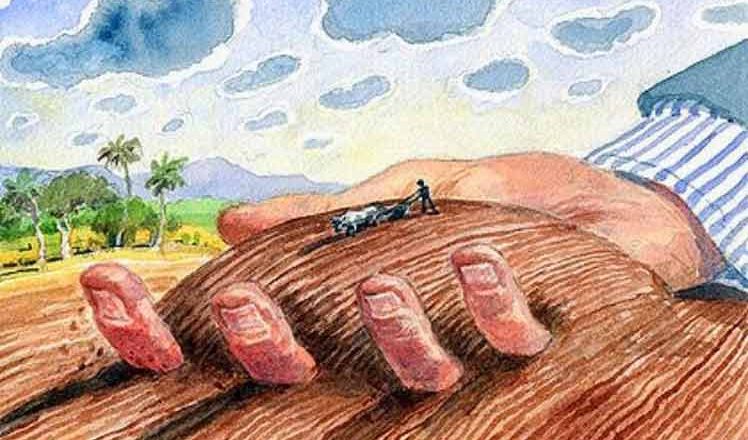 The UK has one of the most unequal distributions of land in the world!

Around 0.6% of the population owns over 70% of the land. Over a third of this is in the hands of the aristocracy – a legacy of the Norman Conquest.

When people refer to ‘land’ most think of the countryside. Land rights movements have focused on gaining access to land for recreation purposes, eg the mass trespass of Kinder Scout, and calling for community buy-outs of the large estates in places such as the Highlands of Scotland. Rural areas are also faced with companies taking control of land for fracking. However, in the city, underneath the buildings and tarmac, there is also land and the struggles for access and community ownership are just as relevant in the city as they are in rural areas. The high cost of housing and other property is mainly due to the value of the land beneath it- up to 80% in central London.

The reason we do not have access to and control of housing, social centres, community gardens, parks and open spaces is because we do not own and control the land. Even land that is in public hands is not controlled by us, but by the State, which is more concerned in supporting commercial interests than public ones.

Anarchist communists have always believed that we can only have a free and equal society when private property is abolished. This does not mean that a person cannot have their own personal property, as some critics of anarchist communism have said. However, we do need to hold the main productive assets of society in common so that they can benefit us all. Land is a main example of this and struggles to get access and control of land are an important part of the working class struggle for a better society.

The LJN was launched in June 2017 with the aims of both educating people about land inequality and campaigning for land to be held in common, for the benefit of all. They have called for a Week of Action on Land Rights from April 14th to 22nd.

Lords Vs Commoners call out leaflet 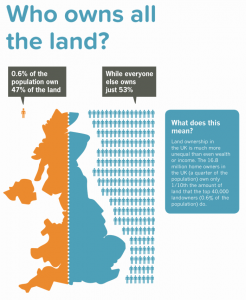 More than a third of our land is still owned by the aristocracy, whose ancestors seized it during the Norman Conquest. By fencing off land and using violence to exclude people, landowners (the lords) have deprived the rest of us of what should be a shared resource.

The vast majority of us, the commoners, own little or nothing. Even most of the land that was once declared common land (for local use) has been taken away from us. Land in community use, such as hospitals, fire stations, school playing fields, is increasingly being sold off for the short term profit of private developers.

Land issues are central to much inequality and environmental degradation in society today. Landowners control and exploit our natural resources and force the rest of us to be beholden to them for food, shelter and other needs. Despite their huge wealth, our taxes are used to pay them £billions in ‘farming’ subsidies and housing benefit, increasing inequality still further.

In the countryside, large landowners dominate agriculture, squeezing out small farmers and collective farming. Agriculture workers are poorly paid and struggle to find housing that they can afford. Huge tracts of land are turned over to grouse moors to provide the rich with space for their destructive past times. Our freedom to walk and enjoy nature is largely restricted to a limited network of ‘rights of way’.

In the cities, land is also unequally distributed, owned by a combination of traditional aristocrats and their modern-day equivalent: offshore companies and institutional investors. Increasingly homes are now owned by buy-to-let landlords rather than by individual home owners or social landlords. All of this forces up the cost of living for those who have to rent. Tenants have little security with standard tenancies running for just 6 months.

There are no controls on rent, so now on average people pay a quarter of their wages to their landlord, while in London it’s roughly half their salary. Even those who manage to buy their own home rarely own it outright until late in life. Most people are stuck paying a big chunk of their salary on their mortgage every month, with the worry that if they lose their job they could lose their home too.

In the last 6 years homelessness has dramatically increased. It is obscene that in this day and age so many people do not have a secure home. This could be achieved if the £9.3 billion a year paid in Housing Benefit to wealthy landlords was instead used to build social housing in all communities.

Urban areas also need well managed parks, community gardens and allotments, so that everyone has access to nature and the opportunity to grow food. But increasingly these spaces are being sold off or rented out to private companies for events, damaging the parks and shutting out residents for lengthy periods of time.

More and more people are realising how important the issue of land is and are questioning the rights of the rich to do what they want with what is our land.

For more information about the week of action and land inequality in general see: