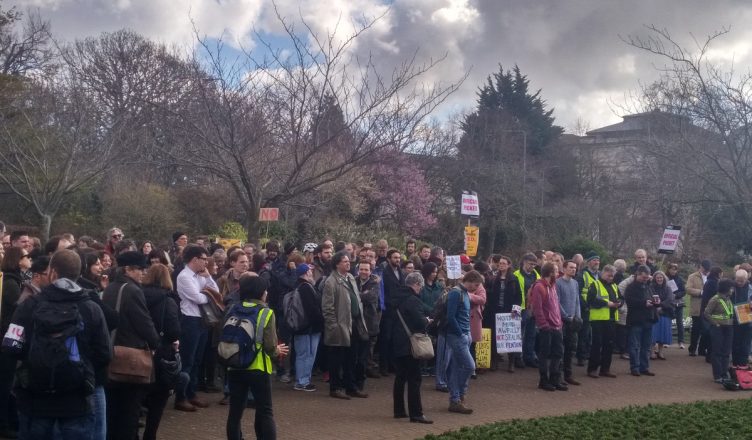 After ongoing negotiations with Universities UK (UUK), the leadership of the University and College Union (UCU) went into full backslide mode and attempted to get the membership to accept a capitulation deal. The reaction from branches was understandably one of anger with 52 branches voting to reject and none accepting the dodgy offer.

So staff in 61 universities continue with their strike, now in its third week. Morale has been high on picket lines across the UK, with considerable support from students and lots of energy, creativity and fighting spirit amongst academic and professional workers.

The nature of the attack upon the University Superannuation Scheme (USS) is so particularly brutal and provocative, with some staff looking to lose up to 50% of their pensions, it has created a level of anger amongst Higher Education workers that has pushed the UCU into calling sustained strikes and making militant noises.

Some UCU branches have opened their strike committees to students, to members of other unions and to supporters from outside the university. Others have passed resolutions demanding that UCU negotiators reject any substantial change to the existing scheme – something which the UCU negotiators have already accepted as inevitable. Both of these are positive but they need to be generalised. In order to win this fight the rank and file have to take the lead and find ways to broaden the struggle in a way that can bring on board ever larger numbers of workers who are facing similar attacks. Student occupations, which have taken place at 9 universities so far, have hinted that direct action could be used to maximise impact beyond picket lines. Years of marketisation of Higher Education, where profit and market position has become central to working life at university whilst casualisation has become widespread have seen little resistance from the union. UCU members are aware of this but instead of waiting for the ‘sell-out’, they need to take the initiative in the strike and link up with other workers’ struggles.

For news and updates, see:

Notes From Below – for rank and file strike bulletins