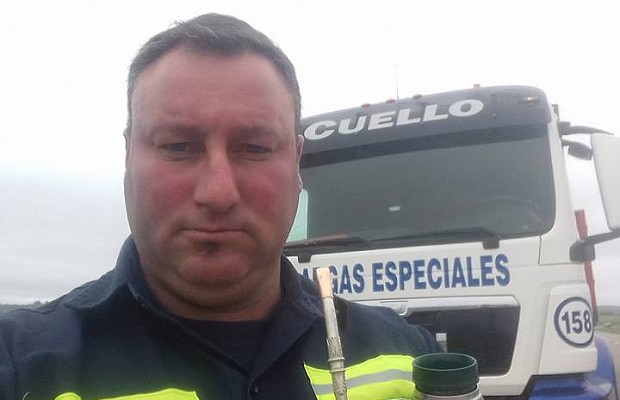 January 3rd– Marcelo Silvera, the interim president of the transport union, SUTCRA, was shot dead by a strike-breaker who had previously bragged about going to his workplace, Transportes Viana, armed so as to threaten workers there not join or support the union. It also appears this same scab had previously made an offer to management to use his truck to run over and kill union members.

The workers at Transportes Viana were on strike that day and Marcelo had been taking his young son to see a doctor when he spotted a Viana truck on the road. He followed the driver back to base, when the scab pulled out a gun and shot Marcelo in the chest. Marcelo leaves a wife and six year old son.

We offer our condolences to his family and solidarity with his fellow strikers.

Statement from Uruguayan Anarchist Federation (FAU)
Click here for original statement on FAU website
On 2 January 2018, the Transport Workers Union (SUTCRA) realized a strike to advance pressure for concrete gains before the Wage Council. During the strike, a “scab” got in between our comrade Marcelo Silvera and his family with a result that is now known to everyone – our comrade was assassinated by the “scab”, hitman, or gunmen at the service of the management.

This filth bragged about going armed to his workplace, of having intimidated workers so that they do not join the union and/or union actions, of having “offered” to his boss to take down unionists with the truck that he drove… A fatal repertoire, but nothing that escapes the reality that exists in our country. This was not the work of a “crazyman” or a “maladapted.” Maybe there has been a component of “excess,” but an excess that is still within the framwork of the political-ideological positions of many sectors of the owning classes.

There is a great quantity of bosses that do what they want with their enterprises and their employees. They pay what they want, when they want, refuse to comply with labor rights, and when workers organize among themselves to make corresponding demands, these bosses say with total impunity that they are not going to pay anything, that they will not comply. Hundreds of these cases exist in the interior of the country.

In many of these cases we encounter a strong reactionary component, in many cases a fascist one. The reactionary logic that has been permeating important sectors of our society permit, with total impunity, the occurance of these acts. That same reactionary and anti-union logic, anti-poor in general, provides that framework for which a fascist can assassinate a union militant and officer.

And now where is the discourse about “serious and responsibly negotiation,” “democratic,” “the labor-management accord,” when there is a union officer assassinated? All of that discourse turns out to be hot air in moments like these. This action is what inaugurates the round of Wage Councils for 2018, a round that will not be the same as those before. This act marks a before and after that they will make a ruling on the negotiations and struggle in the Wage Council.

The bosses want to play dirty. This is not strange to us. As a class, they were the ones who gave us the military coup of 1973. Their managerial associations greeted the coup with open arms and took advantage of the opportunity to fire unionized workers and labor militants by use of the 4 July 1973 Decree implemented by President Bordaberry and the Council of National Security. Fascist sectors that supported the coup took advantage of the opportunity to attack students and workers. The JUP (Uruguayan Youth on Foot) had already assassinated Santiago Rodriguez Muela in High School #8 before the coup. Those fascist groups were already getting involved in the police and military structure. Today, their members move around in those spaces, loose.

The bosses did not come out to denounce the murder, nor did the government aside from the Ministry of Labor. But these, like others, were lukewarm declarations that located the emphasis in “violence” and “co-existence” and in the “peaceful resolution of conflict.”

How else can one explain the main project of the State whose Ministry of the Interior has developed a militarized force to invade and bring violence to the poorest neighborhoods of the country? How else can one explain that the Armed Forced cost millions of dollars daily? Peaceful coexistence when the armed apparatuses of the State are armed for war? Peaceful coexistence when the majority of femicides have been carried out by members of the police? It is a sick joke!

We reassert that in capitalism a peaceful coexistence between classes is an illusion. It is impossible. This recent lamentable act speaks clearly to this. The bosses do not have any shame in applying force to repress popular movements. Capitalism is “naturally” violent, it is in its constitution to utilize violence to maintain an unjust social order. Historical examples show that the dominant classes retaliate with a ferocious repression against el pueblo, all the way up to the use of genocide.

In response to these acts, which are turning points, we believe that a united popular movement should come out to the street to denounce, demand justice, and prevent the same impunity that keeps allowing for these sorts of scenarios. But looking beyond just that, we have to prepare ourselves. More difficult and complex times are ahead. In our neighboring countries military persecution is becoming more and more normalized, such as the offensive against Mapuche and solidarious leftist organizations in Argentina and  attacks against anarchist organizations in Brazil.

The assassination of comrade Marcelo Silvero will not remain an isolated incident without punity. It should not be forgotten. We are obliged to escalate the struggle, to escalate our commitment to militancy for a society without bosses, middlemen, nor militaries.
This is a alarm sounding that the political situation is beginning to change and it requires that we remain alert for the times that come. The only guarantee of change and victory for those from below is that of organization and struggle. Only through popular direct action can we create a Pueblo Fuerte that can flip over this tortilla.

AGAINST THE IMPUNITY OF BOSSES AND THE HITMEN AT ITS SERVICE
STRUGGLE AND ORGANIZATION
FOR THE CONSTRUCTION OF POPULAR POWER
ARRIBA LOS QUE LUCHAN!!