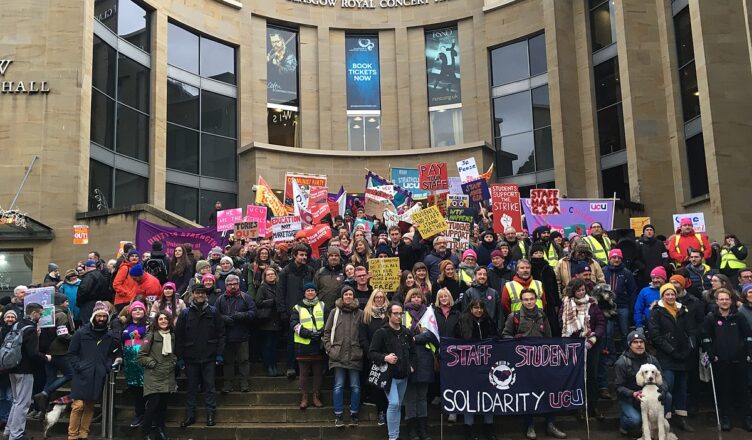 The University and College Union (UCU) have announced strikes for 24th, 25th and 30th November which would involve 70,000 workers in 150 universities. In addition a national demonstration is scheduled to take place in London on the 30th November. The strikes are over pensions, pay, workloads and inequalities. UCU members will be joined in some universities by striking Unite and Unison members.

The strikes coincide with those by postal workers on the same date. In Scotland, school teachers in the Education Institute of Scotland are on strike on November 24th. It is imperative that joint actions-rallies and a joint demonstration on the 30th -are argued for strongly by both university workers and postal workers.

The result of the strike ballots initiated by the UCU was announced on October 24th. 81.1 % voted to strike on a turnout of 57.8% for the pay and conditions ballot. For the pensions ballot, support for strike action was higher at 84.9% on a turnout of 60.2%.

Following the vote, the UCU called a UK-wide Branch Delegate Meeting, which in theory is another level of democratic decision making, but was felt by many delegates to have been a waste of time, with only Branches who had not previously entered into strike action being called to speak. The Higher Education Committee, which met shortly afterwards, agreed to three days of strikes despite the overwhelming mandate for strike action. UCU General Secretary, Jo Grady, argued in a 12 page document that “to win a dispute of this magnitude though, strike action can only be part of the strategy and not all of it”. This document appeared one day before the higher education committee meeting and was clearly designed to halt any moves to greater strike action.

The UCU leadership justified these tokenistic strikes by saying that it had carried out an online survey which involved 4,000 members of the union. 59.1% supported Grady’s proposal of limited action, but for the starters this survey was little publicised amongst the UCU membership, and secondly, it should be remembered that a large number of workers voted for strike action in the original ballots. So the opinions of a small minority were used to sabotage effective action.

The old, right-wing UCU leadership had a history of ignoring decisions by rank and file members of the union, the new left leadership appears to be circumnavigating them.

In addition Grady put off a marking and assessment boycott, which could be a highly effective tool in the struggle, to February next year. The UCU leadership delayed the start of the strike ballot until September. As a result university workers did not come out on strike at the same time as BT, postal and railworkers in the summer and early autumn, and at the same time any assessment boycott of final exams will require a new ballot mandate.

Since the ballot result, the leaderships of both the the rail unions the RMT and TSSA and the Communication Workers, representing BT and postal workers, have cancelled strikes whilst they entered into negotiations. Particularly concerning was the CWU statement that it was signing a joint statement with the Royal Mail bosses for a “de-escalation of tension” and a restoration of “calmness in the workplace”.

The strategy of the UCU leadership is to appeal to Labour and Tory MPs and the media! Really? A Labour Party that has told its MPS not to attend picket lines, a Conservative Party with a viciously anti-working class agenda, and a media rabidly hostile to strike action?

Another part of this lobbying strategy is to aim for a joint statement with the National Union of Students (NUS). This has long been a body that has been a conveyor belt for careers in the Labour Party and in charity organisations. Over the years it has signally failed to fight against rises in tuition fees and cuts in education.

Of course solidarity from university students is essential. As we have highlighted in a recent article on student poverty, students themselves are having problems with the rising cost of living. They also face hikes in university rents and massive tuition fees. In addition the cuts in higher education have affected the standard of their education.

Any solidarity from students must be at an organic, grassroots level. We cannot rely on the NUS to provide serious support for the strikes and they and the UCU leadership will attempt to sabotage any genuine rank and file action.

We need to look towards the development of grassroots strike committees that look towards building support from students and from local communities and for coordinated actions with other groups of workers currently in struggle.