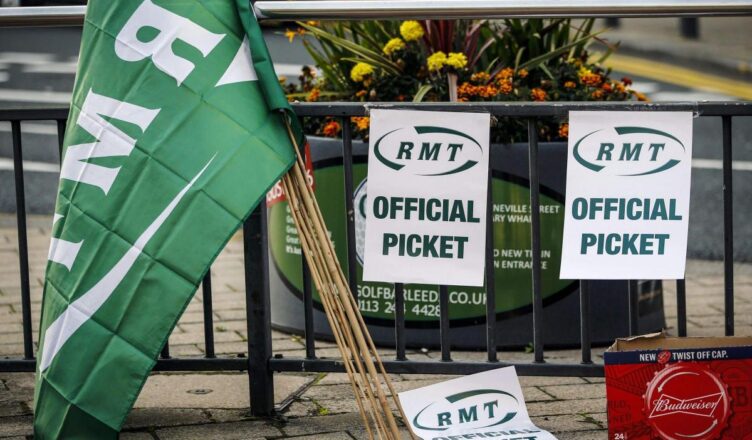 The recent ballot for strike action by members of the Rail, Maritime and Transport (RMT) union resulted in extremely high numbers in favour. Despite the campaigns by the government and media this was a historic result.

The ballot involved workers on Network Rail and 13 Train Operating Companies (TOCs) and demonstrates the deep anger among rail workers over wages and benefits. Railworkers continued to work right through the pandemic risking, health and lives. During all of this there was a pay freeze. The Johnson government took advantage of the Covid menace as an excuse to bring in flexible working hours and to cut jobs. In collusion with the rail bosses they have formed the Rail Industry Recovery Group (RIRG) which looks to impose this agenda on workers.

On Network Rail, workers voted by 90% for strike action on a 70% turnout. These results were echoed in the ballot among TOC workers. Strikes are now likely during the Platinum Jubilee. Baroness Vere, Tory transport minister spluttered that this was “enormously disrespectful” and demanded that the strike be called off. This ludicrous request to give consideration to a royal parasite and scrounger will have been treated with the contempt it deserves from rail workers.

Baroness Vere wailed that “the Government has helped all rail workers throughout the pandemic with billions and billions and billions of pounds of funding. We cannot have a situation where we go back to exactly how life was before the pandemic, because life is not the same”. In other words, workers must now pay for the costs and loss of profits suffered by the boss class, despite having endured a pay freeze and continuing to work during the pandemic. Network Rail is planning cutting 2,500 maintenance jobs, whilst the TOCs continue with pay freezes and threats to jobs.

This increasingly authoritarian government are threatening that rail workers should be banned from striking. They are putting forward the idea of new laws to facilitate this, including the enforcement of minimum service levels.

On Scotrail, more or less nationalised by the Scottish government, RMT members are also balloting to strike after an insulting 2.2% pay offer.

Railworkers will come into head on collision with the Johnson regime if this strike goes ahead. They are set on imposing austerity measures in reaction to the cost of living crisis and the wider economic crisis. This must not be allowed to happen. Rail workers need full support and solidarity.