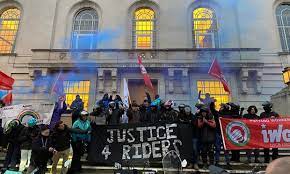 The Metropolitan Police conducted an immigration raid against delivery riders waiting for orders.in Ashwin Street in Dalston in the East End of London on May 14th. There have been months of police harassment targeting riders as part of Hackney Labour Council’s plans to gentrify Ashwin Street. The police attempted to arrest a rider but hundreds of local people forced them to withdraw despite nasty police violence. Following this, delivery riders organised in the grassroots union Independent Workers of Great Britain (IWGB) gathered at Ashwin Street on Wednesday May 25th and rode to Hackney Town Hall, stopping traffic circulation in Hackney.


The riders were met at the town hall by council workers striking for a pay rise of 10%. Drivers addressed the rally, talking about constant harassment and random checks. A survey carried out by the IWGB last year revealed that nine in ten couriers suffered harassment at work with nine in ten enduring physical attacks.

In January workers demonstrated outside the town hall demanding the right to park outside a local McDonalds and to have access to toilets and shelter. Police harassment increased after this rally.

The numbers at the rally, including ACG members and supporters, showed the strength of feeling in the borough. The police and the council cannot be allowed to get away with this intimidation. The May 14th foiling of the immigration raid, following similar examples around Britain, show the way forward.