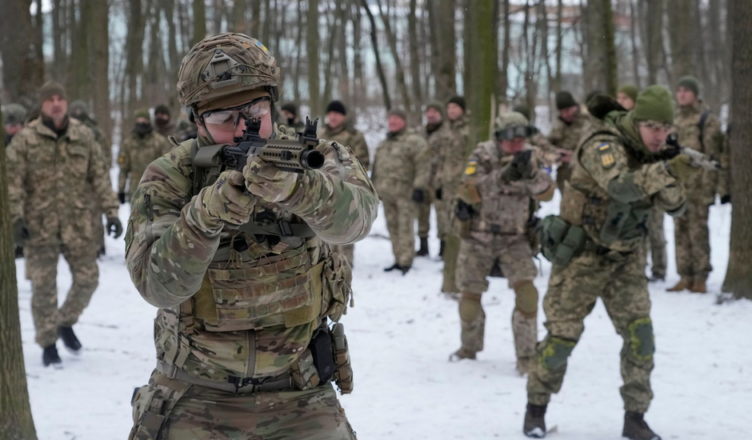 The Western media is pounding the drum for a conflict between Putin’s Russia and the Western powers over Ukraine.

Let us be clear. Vladimir Putin leads a gangster regime in Russia, sometimes referred to as a kleptocracy (rule by thieves). He runs an oppressive regime and as an ex-high up in the Russian secret police, the KGB, he has extremely close relations with its latest incarnation, the FSB (Federal Service Bureau of the Russian Federation). He has come down heavily on any form of opposition, and the anarchist movement in Russia has suffered, with anarchist militants, arrested tortured and given heavy prison sentences. The Putin regime is massing large numbers of troops on Ukraine’s borders for a number of reasons. The domestic situation is far from healthy and the Covid pandemic has aggravated this. Putin is wary of growing discontent and hopes that his belligerent attitude will unite the Russian masses behind him and make them forget their economic woes. This is a gamble, as the Russian masses are in general not keen to engage in warfare with their fellow Slavs in Ukraine, and remember the disastrous consequences of the war in Afghanistan, when Russian troops sent in to save the pro-Russian regime there were bogged down for years with massive casualties.

The fall of the Soviet Union seriously weakened Russia but thanks to rising oil prices coupled with the rise to power of Putin, it began to re-assert itself. It was determined to control and influence the surrounding countries on its borders, both for defence reasons and to re-affirm its control over those regions which it had established after World War Two.

The political-military alliance it had established with its satellites, the Warsaw Pact, was dissolved. However, the corresponding political-military alliance developed by the United States and the Western European powers, NATO, was not wound up and remains an instrument of both the USA and various component Western countries. In fact, NATO sought to increase its influence and has intervened in Kosovo, Afghanistan and Libya. Despite promising the Russian regime that it would not expand its influence east of what was East Germany, it has invested its forces in the countries surrounding Russia, including the Baltic States.

NATO is an aggressive military machine, not a body there to passively defend the West. It has intervened in Libya, in Afghanistan and Iraq. It actively seeks to recruit not just former Soviet republics like Ukraine and Georgia into its alliance, but also so called neutral countries like Finland and Sweden, both very close to Russia. It demands that each component country of NATO spends at least 2% of its Gross Domestic Product on military expenditure.

At home here, Johnson and the Tories have attempted to divert attention away from the whirlpool of scandals that is pulling them down. The British spook agency, MI6, has claimed Russia is preparing to install a puppet regime in Ukraine. The Labour Party of Keir Starmer have joined in with the sabre rattling.

However, NATO itself is unstable. The predominantly Slavic countries of Croatia and Bulgaria, who have membership of NATO, have indicated that they would send no troops into any possible conflict in Ukraine. Germany, and to a slightly lesser extent France, have shown a reluctance to be involved in this.

As for the government in Ukraine, it contains several far right ministers keen on reviving reactionary, fascistic and anti-Semitic sentiment in that region.

No taking sides in this conflict. Neither the Putin regime nor the NATO military machine and the reactionary Ukrainian government. Mobilisation against any war moves. Our real enemy is the class enemy, the ruling classes, whether in Washington, Whitehall, Moscow or Kyiv.

In an interview with The Commoner, the Ukrainian anarchist grouping, Assembly, have stated that:

“It may surprise you, but we know almost no one here who is interested in such news, and even fewer who take it seriously. For the most part, people are worried about exorbitant energy bills that are leading to more and more houses having their heating switched off, and enterprises to working or going into the shadow sector precarising their workers. Ukrainian gas is mostly exported to Europe, while energy carriers for power plants are bought from Russia and the occupied part of Donbass. So you can imagine why we would be sceptical about these horror forecasts from the Western press. It’s true that we are on the verge of social collapse, but it won’t be caused by a military conflict… There is no doubt that Putin’s regime is now playing the same role of a continental gendarme as did Russian Tsarism under Nicholas I. You are also absolutely right that before 1917 there was 1914, when all of Europe thought that a small victorious war would last a couple of weeks, only to result in a world-revolutionary wave ending in 1923. With this in mind, we can see why the imperialist politicians and corporations are wary all the more that a military clash in the very centre of Europe will again lead to a comparable social explosion in their countries (at least in the USA — taking into account the rise of revolutionary struggle there during the last years). So the world leaders intend to divide spheres of influence peacefully and rattle their weapons just to facilitate their negotiations. The pandemic has shown that the modern capitalist order is a Colossus with feet of clay — and the very fact that the world has entered a new era of global repartition confirms this with all clarity.

For example, Ukraine also conducts military exercises on the Polish border and Ukrainian officials glorify those who carried out the genocide of the Poles during the Second World War. So what — do you really think that Ukraine is preparing to attack Poland? Neither do we…”