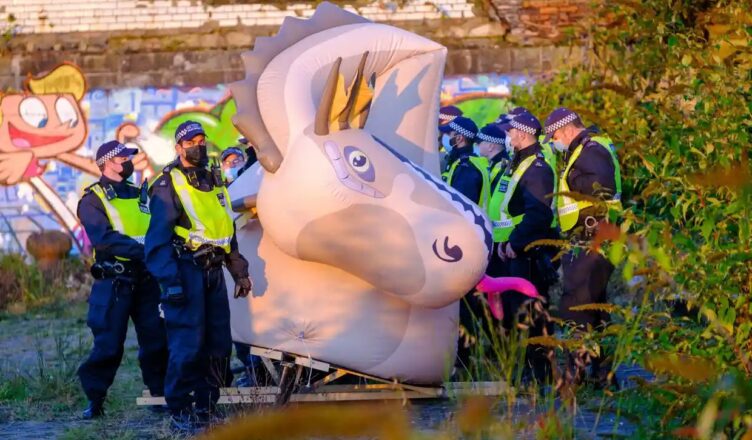 So, Police Scotland’s promise to “facilitate peaceful protest” didn’t last long.  As early as 7am on 3rd November they impounded an inflatable Nessie, claiming it “contravened maritime regulations”.  The Loch Ness Monster was part of a stunt by the Jubilee Debt Campaign, who hoped to bring attention to the debt that the Global South faces due to the Global North giving so-called climate assistance in the form of loans rather than grants.

Then came reports of people being stopped and questioned under the auspices of all manner of bizarre pretences.  This included police stopping the broadcaster Kaye Adams for “looking surreptitious”.  Another campaigner was stopped for “talking to people” and “walking too fast”.  These random and laughably vague tactics are clearly intended to harass.  We are hearing many such reports since the beginning of COP26.  It’s becoming clear that the police are taking a very broad view of their remit.

Kettling tactics started today too, with protesters in Glasgow City Centre held in a kettle for hours and denied access to medication or toilets.  Men, women and children are having to urinate in the street.

If you are out and about during COP26, it doesn’t matter if you are there as a protestor or not, as the Scottish Community & Activist Legal Project (SCALP) remind us, “the line between ‘activists’ and ‘the community’ is an artificial one used to divide us. Policing affects us all”.  So bear in mind the advice from SCALP:

1. If stopped and searched, you do not have to answer any questions or give any personal details.

2. If the police stop and search you, you must be told the power you are being searched under, and the reason for your search. If they do not offer this information, ask for it.

Netpol campaigns co-ordinator Kevin Blowe said: “It is depressing to watch Police Scotland, from the very start of Cop26, abandon its much-publicised promises to remain ‘friendly, fair and accommodating’ to protesters.

“Predictably, we have seen already the use of widespread intrusive surveillance, the deployment of forward intelligence team officers to target individuals even when protests are not taking place and the arbitrary, disproportionate use of police stop-and-search powers.”

The ACG deplores these heavy-handed police tactics.  That they have started so early does not bode well for the coming days.  Remember that if you can’t stay silent, say “no comment”.