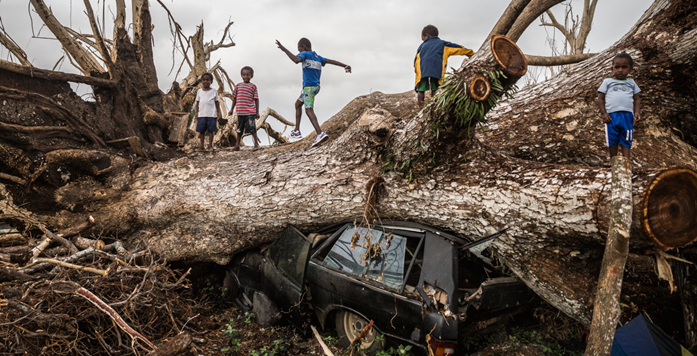 The wasteful opulence that characterizes the middle and upper classes of Western industrialized nations was created by colonizing and plundering the Global South. Between 1850 and 2002 these aggressive nations emitted more than three times more greenhouse gases than the victims of their racist colonialism. But who will pay the heaviest price for climate change? Predictably it will be those who have done the least to cause it and who have are already suffered the most from capitalism’s scramble for ‘growth’. More frequent and more violent storms are destroying crops, rising sea levels are threatening flood and ruin, heat and humidity is set to render life in some areas intolerable.

The most basic consideration of justice dictates that reparations must be made by the wealth hoarders so that exploited regions get resources to mitigate the existing damage and to plan for a sustainable future.  But a cursory look at what the economic overlords of the wealthiest nations are doing right now, through the International Monetary Fund and the World Trade Organization, indicates that they don’t even remotely care about paying the enormous debt they owe to the Global South. Through conditionality linked to ‘aid’ they are vigorously: deterring socialized health care and social security; disallowing protections for domestic industries and their workers; and ruthlessly enforcing unjust debt repayment. This commitment to the bullying tactics of neo-liberalism offers little hope that they will take climate reparations seriously.

If the powerful intend to pay only lip-service at best to climate reparations what can we do? Whilst the ACG advocates a revolutionary democratic restructuring of society, we are not deluded. This won’t happen quickly enough to address the imminent effects of climate injustice. Nevertheless, in bringing pressure to bear on those who hold the power, revolutionary tactics are relevant. The concept of racist environmental injustice was put on the political map of the world’s most powerful economy forty years ago when a Black community in North Carolina rebelled against a toxic dump being placed amongst them (https://www.washingtonpost.com/climate-environment/interactive/2021/environmental-justice-race/). This kind of action offers a model for challenging the power of the wealthy. It is right to protest at COP 26 but it will achieve little. Grass-roots collective action in communities and workplaces has revolutionary potential because it is rooted in true democracy. It threatens the elites and at the moment pressure from below is our only realistic option.