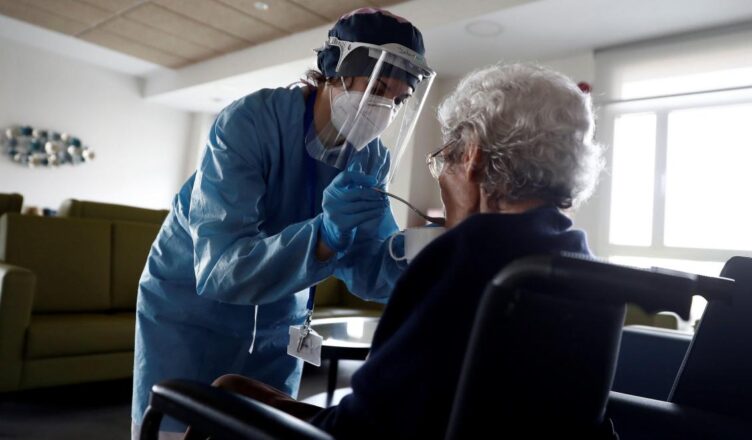 From the editors of Grey Panther, ACG pensioners’ bulletin.

At least a quarter of those who have died in the UK from COVID-19 are residents of care homes (not to mention the 300 plus care workers who have died of the disease).

The elderly are more likely to contract the disease, as we know, but this doesn’t explain the large number of deaths in care homes. The Johnson regime is still not accurately recording the numbers of deaths from COVID-19, leaving out deaths at home and in care homes.

The disproportionate number of people over the age of 60 who have died from COVID-19 can be explained by two things:

1) The increasing privatisation of the care system

2) Deliberate policies by the Johnson government

Tackling the first factor, it can be seen that in 1993, 95% of care at home was provided by local councils. It is now almost completely provided by private companies. The shareholders of these companies cared more about profit than the care of the elderly, and many collapsed because of this, even before the COVID-19 cataclysm.

These companies have sought to maximise profit by employing workers on zero hour contracts.

In 1996, under the Tory government of John Major, care homes were privatised with the ultimate result that they contributed to the large numbers of deaths among residents of care homes.

One of the worst example is Four Seasons Care whose care homes in Glasgow and Edinburgh both reported 13 deaths each from COVID-19.Four Seasons became one of the biggest care providers in Britain with a total of 101 homes by 2000. They used privatisation to get hold of care homes at bargain basement prices. For example, Dumfries and Galloway Council sold five care homes worth £2.03 million to them for £1 each.

Four Seasons was taken over by private equity firms. They gobbled up another big private care provider, Southern Cross, in 2011, which had spiralled into debt, but themselves went into administration last year with huge debts.

In December Four Seasons handed over 44 care homes to other private care providers, but continued to run the remainder. The running of care homes by these various private companies has proved to be shambolic. Whilst vainly attempting to make profits, these employers treated care workers abysmally, with zero hour contracts, little training, low pay and the resulting big turnover of staff. Many of these workers were themselves sub-contracted by care worker agencies. On top of this, these care homes increased their fees for residents and their families. At the same time, these care homes have been run as cheaply as possible, in order to maximise profits for shareholders. These shareholders include many pension funds and many offshore investors. We should really gasp at the appalling cynicism of pension funds, where the management of retirement savings is used to exploit the dependence of the elderly!

Another disastrous result of privatisation was a fall in the number of care homes with many of those remaining being larger homes where the coronavirus could spread more rapidly.

The second contributory factor in this culling of the elderly has been the wilful policies of the present government.

In 2019 the Global Health Security Index classed the UK as ranking second in the world for readiness for a pandemic (the first was the USA, where Trump dismantled pandemic preparations put in place by Obama).

Despite what Dominic Cummings said in his recent performance in the garden at No. 10 that he and his boss were always in favour of lockdown, the Johnson administration was convinced that herd immunity was better than lockdown to counter the coronavirus. It announced this on 26th January. Cummings himself at a private event at the end of February announced that herd immunity was the way forward, and that it didn’t matter if some pensioners died. It was echoed by Sir Patrick Vallance, the government’s chief medical adviser. Cummings at the appearance in the Downing Street garden, even went as far as claiming he had predicted the pandemic “for years”. In fact, in April this year, he secretly doctored a year-old post on his blog to add a warning about pandemics.

Even if the lockdown had been put in place just a week earlier, it would have saved 30,000 lives and reduced infections and deaths by a factor of five, according to the climate modeller James Annam.

In fact, the Johnson government knew by February 11th what the results of the virus spreading to Britain would be. Instead, nothing happened. Result, the UK now has the highest number of deaths and infections per capita. Testing and tracking were dropped by the Johnson regime on March 12th, and there was no testing of those travellers coming into the UK.

The status of the pandemic alert was reduced in the third week of March, meaning that the standard of PPE equipment for health workers was reduced.

But it also meant, that on March 19th, infectious patients could be returned to non-specialist care, which meant that many elderly people suffering from the coronavirus were deliberately returned to care homes, there to die in thousands.

All of this should have been obvious to the Johnson government. Exercise Cygnus, a pandemic simulation exercise carried out in 2016, established that a pandemic would have deadly consequences for care homes. The government at that time said that it carried out the recommendations of the exercise, that new measures needed to be put into place to protect the elderly. It appears that the present government has broken these guidelines. It means that patients were not tested for the disease and that they were then moved back from hospitals to care homes. Agency staff were allowed to move from care home to care home, in the process spreading the disease.

All of this has been deliberate. The Johnson government acts to protect the big shareholders and maximise profits. Everything becomes a victim of the market. Social services, health and care, are privatised. Pay is kept down, both in the privatised care homes and in the public sector.

The deaths of many thousands from coronavirus are the result of the fatal logic of capitalism. Both private companies and those who act within the State are looking out only for profit. There is no respect for the elderly in all of this, profit comes first.

We accuse capitalism and those who help administer it, the Johnson government, of mass murder. They are out to make money out of people at the ends of their lives.

The elderly should be looked after and cared for. Many have contributed much to society. Care homes should be socialised, as one of the urgent measures required by a social revolution. This socialisation should involve the direct input of care workers, residents and their families. It is increasingly clear that capitalism exercises a death grip over all aspects of society, whether it be climate change or old age. Time to finish with it!