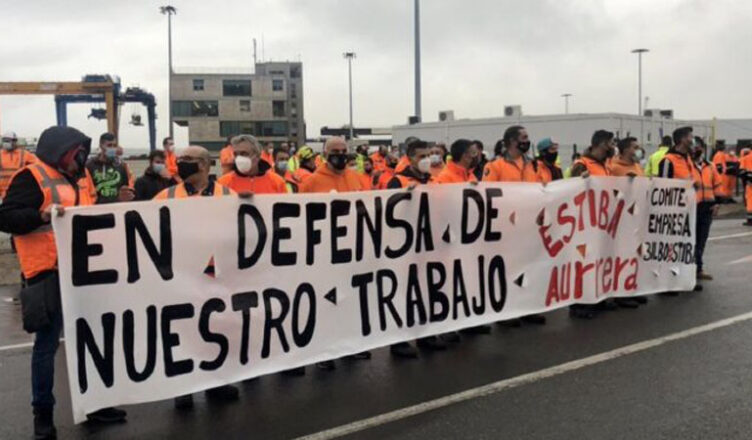 December 2020 saw high levels of industrial action in Spain. In the Basque country, at Bilbao, dockers ended their 57 day strike at the beginning of the month. They had gone out over the undermining of their rest days, a run down of the workforce, the lack of modernisation of machinery and the planned wage cuts for older workers.

In the Asurias region, steel workers working at Daorje carried out two hour daily strikes for a week over attacks on conditions by the bosses. Daorje responded with a lockout. Elsewhere in Asturias, gold miners at Orovalle struck during the first two days of the new year against a breaking of a collective agreement by the bosses. They are planning to take further action.

In Galicia metalworkers at Alcoa continue their strike of two months over decrease of output and mass sackings. In the Canary Islands, postal workers went out in late December against redundancies and the rundown of the postal service. Elsewhere in Spain, postal workers have walked out in Almeria, Gijon, Guadalajara, Madrid and Murcia against sackings and an increased workload because of the coronavirus.

In Ourense, bus drivers went on strike in January against cuts in wages. Tram workers in Zaragoza are also striking over wage demands and conditions. In Barcelona, workers on the transport system will strike on January 11th over precarity and temporary contracts.

In Valencia, workers in the fruit industry, in the picking and packing of citrus fruit, went on strike between December 14th and 20th.

In Andalusia, radio and television workers struck in late December over budget cuts.

After the threatened strike by Repsol workers due to the unilateral decision by management to close 16 commercial centres in the Liquefied Petroleum Gas division, there was a sellout by the unions, with an agreement that 3 centres stay open, with all workers keeping their jobs, but in some cases, forced to move to other cities to work.

This industrial unrest comes at a time when elements in the military, in alliance with the far right Vox Party, which has links with the Trump administration, are threatening the joint Socialist Party/Podemos government. Retired general, Emilio Alaman, has brought out a manifesto, signed by 750 other retired officers including 70 other generals, which contains veiled support for the failed coup plotters of 1981, which attempted to overthrow a previous Socialist Party government.