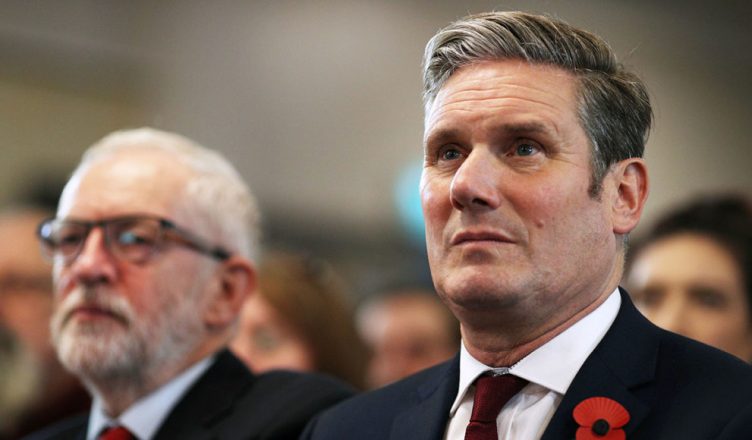 As predicted, Keir Starmer won the Labour leadership election with 56.2% of the vote (275,780 votes). The “left” candidate, Rebecca Long-Bailey (who expressed a willingness to use the nuclear deterrent) came a poor second with 26.5% of the vote.

Starmer won in all three categories of membership, the unions, the Constituency Labour Parties (CLPs) and individual members. In a campaign backed by the Blairite Progress group and the ‘old right’ Labour First group, two Corbynite local party representatives on the National Executive Committee (NEC) were replaced and these groups’ preferred candate Carol Swell now sits as Black, Asian and Ethnic Minority representative on the NEC.

It was perhaps indicative of disillusionment in Labour ranks that nearly 300,000 eligible voters for the contest failed to vote. This shows that many who were enthusiastic for radical change via a Corbyn government are now disillusioned and inactive.

As we previously said, Starmer will now take Labour towards the right, and may start a witch hunt against the different Corbynite currents within the Party. This is indicated by the makeup of his shadow cabinet.

The Blairite Rachel Reeves is now shadow chancellor of the Duchy of Lancaster . Reeves has gone on record as stating that immigration could cause race riots and that Labour was not the Party of those on benefits, and that they could be expected to be tougher on them than the Tories. Another Blairite, Lord Falconer is now shadow attorney general. Corbynites Burgon, Dawn West, Ian Lavery, Barry Gardiner and Jon Trickett did not retain their posts in the new shadow cabinet. As a sop to the Left, Long-Bailey became shadow education secretary.

Starmer joined with right wing Labour MPs in 2016 to attempt to overthrow Corbyn. He is now saying that he is not ruling out a government of national unity in face of the coronavirus crisis and his lieutenants in the shadow cabinet have made conciliatory remarks about cooperation with the Johnson regime, as for example the shadow home secretary, Nick Thomas-Symonds.

Starmer received the most nominations from CLPs and affiliates receiving nominations from 374 CLPs and 15 affiliates, with Long-Bailey with 164 CLPs and seven affiliates, and finally Nandy with 72 CLPs and four affiliates. This shows that the suggestion by the Corbynite grouping Labour Transformed that the CLPs can become centres of local activism and mutual aid is a ludicrous pipe dream.

Starmer was knighted for his services to the British establishment when he operated as Director of Public Prosecutions from 2008. A lawyer, like so many of the political class (Brown, Sturgeon, etc) and a millionaire, Starmer failed to prosecute any police officers over the killing of the innocent Jean Charles de Menezes in 2005. He also blocked the prosecution of a brutal cop over the killing of Ian Tomlinson in 2009. He refused to act over the dodgy trial of environmental activists after it was revealed that spycop Mark Kennedy had acted as a provocateur.

And perhaps most important of all, during the student protests of 2010, as DPP he implemented measures against demonstrators, and in 2012 with the riots that erupted in London and around the country, he implemented 24 hour fast tracking of trials that included one person with no previous criminal record sent down for 6 months for possession of a stolen case of bottled water valued at £3.50.

Let’s be clear, Starmer is no friend of the working class, he is no progressive, despite what erstwhile Corbynites like Owen Jones and Paul Mason are saying.

Corbynism is finished. Many Corbynites have now tacked to the right and fallen in behind Starmer. Many others, who sincerely looked for radical change, should now re-consider their membership of the Labour Party. The real fight, as we have constantly emphasised before, during and after the Corbyn wave, is in the workplace and in the neighbourhoods. It is absolutely imperative that grass roots movements are constructed there. Diversion towards transforming the Labour Party has been shown to be an illusion.