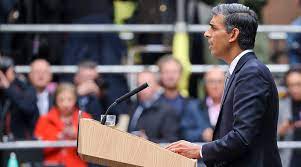 Rishi Sunak has delayed the planned economic forecast from the Office for Budget Responsibility (OBR), which is attached to the Treasury, from Halloween to November 17th. This postponement will not make any future prospects any less sombre.

The OBR will say that there is little chance of growth over the next two years and that public finances will be at stretching point.

Market mortgage rates will mean that more and more homeowners will reach the end of their fixed deals and will be forced to accept massive rises to their household budgets. Millions more will have to remortgage and are cutting their spending. Many will have their homes repossessed.

Inflation and the rising cost of living will hit the housing market. Mortgage rates have doubled in the past year. Despite high employment figures inflation is rising far above wages and borrowing costs are continuing to rise. In the three months up to June 2022 inflation rose to 9.4 per cent whilst wages rose 4.7 per cent. This meant the ‘real value’ of wages fell by three per cent. Since then inflation has continued to rise, with the Bank of England predicting a rise to 13 per cent by late November.  House prices now stand at eight times the average income, an all-time high. The think tank Resolution Foundation stated that the UK was now facing the “deepest pay squeeze in 45 years”. The Office of National Statistics said that the real value of pay was continuing to fall, and is still dropping faster than at any time since comparable records began in 2001.

Meanwhile bankers’ bonuses rose two times faster than the speed of wages since the economic slump of 2008. Bonuses in the finance and insurance sector are now on average about £20,000 a year. A typical bonus of a banker is worth almost two thirds of an average worker’s pay.

Whilst the government is refusing wage rises for millions of workers, City bankers are trousering large amounts of cash.

This situation will trigger rising discontent and further industrial unrest as workers look to fighting back.