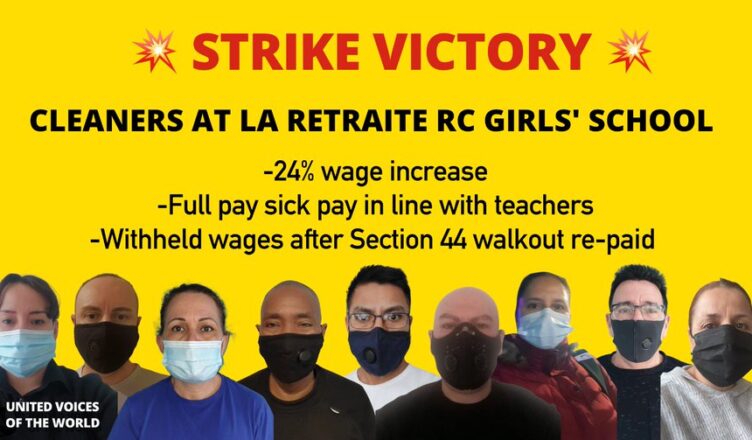 If you fight, you may lose. If you don’t fight, you always lose. But if you fight with determination to win, and if you are in control of your fight, the victory is all the more likely and all the sweeter.

Cleaners at the prestigious La Retraite Roman Catholic Girls’ school in South London, organising with the grassroots United Voices of the World union, have won a 24% pay rise, full sick pay in line with teaching staff and the repayment of lost wages following an earlier Section 44 walk out over health and safety concerns. The outsourced, entirely migrant, workforce had begun a 40 Day ‘Lenten’ strike (40 days and 40 nights) on March 16th whilst their union threatened to sue the employer for institutional racism over their flouting of the 2010 Equalities Act with regard sick pay. The school, no doubt concerned over its public image, buckled.

This is undoubtedly a great result, the news of which should be made widely known amongst workers everywhere. Workers can defend themselves if they are ready to fight, determined to win and, very importantly, in charge of their own struggle. The United Voices of the World is a small, combative, grassroots union with a horizontal organisational structure and an emphasis on collective direct action that organises low-paid, migrant and precarious workers in London. Most workers in low-paid and precarious work are either unorganised or ‘organised’ in trade unions that are happy to take their membership subs but have little interest in fighting for better conditions and equality. The union, for these workers, is a distant ‘service’ that does nothing unless pushed. It is the opposite of the workers’ self-organisation that is needed to stage a successful fightback, whether at a local or global level.

The task before us is to build militant networks of working class self-organisation involving rank and file committees in unionised workplace, fighting unions like the UVW and solidarity organisations that can mobilise resistance outside workplaces as well as within.

Victories like that at La Retraite give us inspiration but organising ourselves will give us power!