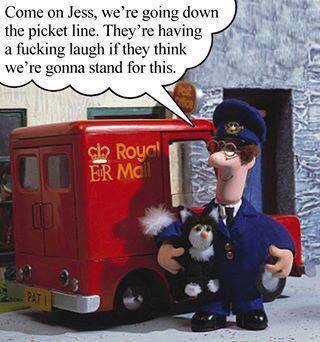 A member of London Anarchist Communist Group conducted an interview with a striking postal worker who works in central London.

I work in one of the central London sorting and delivery offices, as a walking postie. Management is looking to suppress 75% of the walking posties in our office. There have been constant revisions and a downward spiral of cut after cut. This new management led by Simon Thompson is particularly nasty.  I don’t think they want to negotiate at all.  After many years on the job, I still am low down on the seniority ladder, which gives priority of jobs to those there the longest. Many have seniority of from between 25 to 40 years. Royal Mail used to offer EVR (Early Voluntary Redundancy) but new management have stopped this, so many are staying in the job. The problem for me is that next year I don’t know whether I’ll be able to stay in my office or not, or be moved to another office or other duties.

Management are already talking about scanning in and scanning out machines, which clock your starting and finishing times. With this you would have to stay in job even if you had finished posting. One of the perks of the job has been being able to go home early after having delivered all the mail, which has always been the carrot with the job.

Central London offices have been hit very hard, because it’s mainly offices, with much less residential addresses. People prefer now to work from home, as a result of the Covid pandemic, with the knock on effect on us. It seems to have become a permanent fixture. As a result a lot of cafes and sandwich shops have closed down.

The union has told us to work slow and take all of our breaks, but because postal workers are used to going fast in order to finish early, they are not obeying union instructions.

Management are pushing for all postal workers on delivery to be drivers. I would consider this if they paid for driving lessons, but this is not guaranteed, and then you have the aggravation of driving in traffic in central London, with all the stress and delays.

How solid is the strike?

As I said, I’m in a big office in central London, with 100 postal workers working on the day shifts, with just a couple always scabbing. These scabs would have gone on the rounds before, but they are now  going to other offices to deliver.

Overall there is solid support for the strikes. Some smaller offices in the countryside have seen one or two on the picket line with the rest walking in to work. Those workers who are not in the CWU union do not consider themselves scabs or blacklegs.  Those scabbing tend to be those always working overtime, greedy for the money.

The union at my sorting office has not been good at persuading people to go on the picket line. In other areas, like Whitechapel, there have been large numbers out on the picket line, with barbecues and all that. But at my office, at least half of the workers live a long way away, because they can’t afford to live in central London. This causes problems with attendance on picket lines.

We don’t get strike pay, so we lose a day’s pay when we go out on strike. You can make this up by working on rest days, because management have cut so many jobs so they need replacements.

No one expects the union to get everything they demand.

Might a lot of people leave after the strikes if demands are not met?

If EVR was offered, half the workforce would take it (the average age at my office is 55)

The scenario could be that the work is increasingly casualised with machines tracking workers. They have GPS on them, so they can see where you are exactly on the map. Redelivery would mean attempting to deliver 3 or 4 times, if recipient of post is not there, will have to continue to attempt to deliver, as there is currently no limit on this.

You can now book to have posties to pick up parcels at the door. This has created a lot of extra work as part of my round. If the person who booked doesn’t answer the door or hasn’t wrapped the parcel, then you have to cancel. This is a free service. Management could use this to cut staff at Crown offices.

Management would like to move more workers on to same shift so that they do both deliveries and collections from Crown offices and post boxes.

Will the strikes be successful?

According to Dave Ward (CWU leader) management are starting to talk but we are miles away from decisions. Management wanted to call in ACAS (the government mediating body Advisory, Conciliation and Arbitration Service) but this would have meant the strikes stopping whilst they mediated. The CWU called their bluff on this and refused. Management is now threatening the sacking of ten thousand workers in response to the strikes.

The forthcoming strike days have been coordinated for the maximum effect, for Black Friday and Cyber Monday (November 25th and 28th). There is a total of 19 days of strike action in November, with December dates as yet unannounced. I expect similar action then.

I think there might be some kind of stitch up with the union agreeing to Sunday work. The CWU likes to talk militant and radical, but if you look at its history it is one of sell-out after sell-out.

The strike action is now being staggered, which should have been done earlier. This means workers on trucks and trailers out on one day, workers in processing out on another day, etc. So when one section is out on strike, other sections cannot work but will be paid!

Some large companies like John Lewis and Marks and Spencer have threatened to withdraw from their business and go to private companies.

Some managers in the offices have been given a £1500 bonus during the strikes. They are in the Unite union. I’m pretty disgusted that Sharon Graham hasn’t said anything about Unite members crossing picket lines. So much for her militant posturing. Dave Ward has just now said he will be approaching Unite about this.

Previously management came to some sort of agreement with the union, but not with the new management. I haven’t heard what the strategy of the union is going to be after the November and December strikes. The CWU leadership is as usual appealing to the Labour Party, to a Labour victory at an election two years away. Starmer of course has not addressed himself to the postal strikes.

Update from interviewed postal worker: some offices in  the North London postcodes are struggling with backlogs at the moment (plus sick level i guess) so yesterday they forced people in  Mount Pleasant delivery to go there to help out (postcodes where they don’t know the streets ,sorting etc) about 8 people in total. Come next year with potential massive job cuts in central London offices there is a risk of lots of us being eternal casuals within the industry, being pushed around London to cover etc. so not looking good.