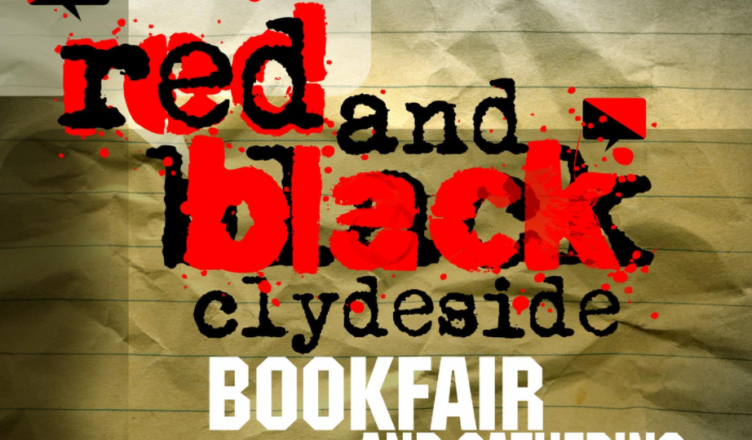 “We’re very excited about it. We see it as a chance to rebuild community connections after the lockdowns. To reinvigorate community resistance, share ideas, and meet like-minded people.” A Glasgow-based comrade was telling us about the building excitement for Red and Black Clydeside, billed as a bookfair and gathering of community resistance and the libertarian left, scheduled for Saturday 7th May, at the CCA on Sauchiehall Street, the proverbial busy heart of Glasgow’s city centre. The local saying goes that when somewhere is packed, be it a pub, or your mum’s living room, “it’s like Sauchiehall Street in here!” And with the interest in it, this bookfair and gathering looks like living up to the Glaswegian proverb.

“It’s an idea that’s been kicking around for a while now,” our Glasgow comrade explained. “There’s such a lot going on in working-class communities in the city, but we felt like there needed to be a focus, an exchange of ideas, a way of all the people doing all this great stuff feeling they weren’t on their own. That they were part of something wider: a wave of working-class self-empowerment. And the period around May Day just seemed like the right time for it.”

The Scottish city certainly has a history of working-class activism, and the anarchist movement has been at the centre of that energy, providing ideas, impetus, and inspiration since the nineteenth century. The Red and Black Clydeside website lists some of the individuals and organisations they rightly celebrate. Names like Ethel MacDonald, Stuart Christie and Guy Aldred. And May Day has long been a focus for this vital current.

“The May Day on the Green event was all about reclaiming Glasgow Green and May Day from officialdom and returning it to its working-class roots. We hope to build a sort of festival period of commemoration and celebration, starting with Workers Memorial Day on 28th April, and taking in May Day itself, then culminating in Red and Black Clydeside the following weekend. So, we begin by remembering all the workers injured, disabled, or killed while doing their jobs. Then we celebrate the traditions of free speech on Glasgow Green, and kind of re-stake our claim on it for common use, and finish with this celebration of community with Red and Black Clydeside. Of course, that’s a lot to pull together the first year. But we have to start somewhere. This is the pilot!”

It’s an idea that has attracted the attention of several organisations who have already booked stalls for Red and Black Clydeside, as well as confirmed presentations from Iain McKay (historian), Ben Franks (political philosopher) and Nick Heath (historian), all lining up to be among those wanting to speak at the event.

“We want to make sure everyone feels comfortable. We’ve booked the Clubroom, which is a big room at the CCA, with great ventilation. We know Covid isn’t over yet, and a lot of people are rightly nervous. So, ventilation is vital. The venue is also great for physical access. There’s lifts to every level. And we’ve worked on a safer spaces statement to show our commitment to inclusion across the board. It’s there on the website for anyone who wants to read it. If you’re coming, you should read it”.

The excitement about the event is palpable. We wish the organisers every success and look forward to attending ourselves.