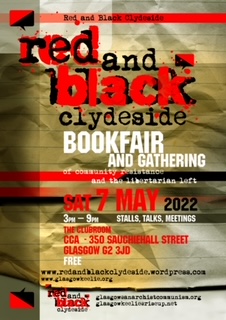 The Red and Black Clydeside bookfair and gathering is fast looming! There’s an exciting line-up of talks and meetings at the Sauchiehall Street venue, the CCA, including:

Ben Franks on “The (Alt.) Right and the Attacks on University Workers: the case of Nathan Jun”;

Iain McKay on “The life of Peter Kropotkin (author of the Conquest for Bread) from the Paris Commune to the Kronstadt Revolt”;

Nick Heath, Launch of The Idea – a timely new work on Anarchist Communism from long-term activist and historian;

Jade Saab, researcher and IWW Regional Organiser, on “What is a revolution? Lessons from the recent uprisings in North Africa and West Asia”.

Meetings, including the Communist Workers Organisation on “Nationalism and Internationalism: with an eye towards the current war in Ukraine, presenting a ‘No War but Class War’ perspective; Glasgow Anarchist Communist Group on “Lets Get Organised: the need for an anarchist communist political organisation”.

And films in the CCA cinema: “Visions of Resistance – shorts about anarchism, May Day, and struggle”.

Friends of the People’s Palace