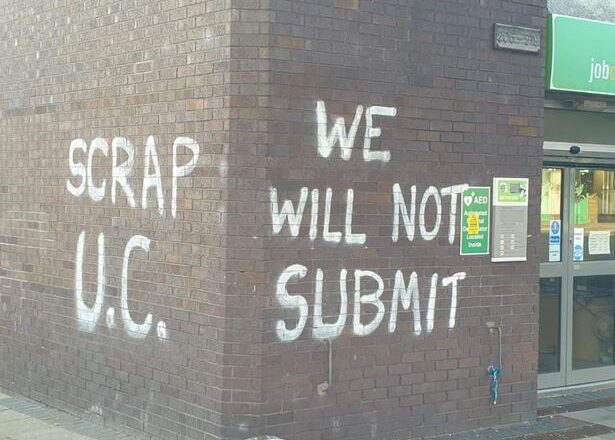 The Covid-19 lockdown in Britain has doubled the number of people forced to claim Universal Credit to 2.9 million. This does not include the sharp increase in claimants for Job seekers Allowance, (its value still frozen at the 2010 level). The 8.9 million “furloughed” workers laid off because of the pandemic are not included either. They are still classed as employed.

We have reported the many failings of Universal Credit (UC) before in Jackdaw. The most notorious problem faced by claimants is the completely unnecessary five-week delay before any payment is made. This creates huge debt problems and rent arrears for hundreds of thousands of households.

The delay in payment is still there, but to cope with the sudden doubling in claimant numbers since March, the Government has had to temporarily forgo other controversial features of UC. It also has had to increase the weekly amount of benefit by £20 so that more people are eligible.

The conditionality rules that force claimants to spend up to 30 hours a week pursuing often non-existent jobs have been waived. Face to face assessments at Job Centres have stopped. Universal Credit is designed to punish people for the crime of not working or not working enough hours. The arbitrary rules are enforced by benefit sanctions (the loss of benefit for a minimum of four weeks). The use of sanctions too has been suspended temporarily.

Until now. The 1.5 million new claimants who became reliant on Universal Credit due to the lockdown are in for a shock. The Government has refused to listen to pleas from experts in the field and community voices. It will re-instate conditionality and benefit sanctions as from 1st July. Claimants will be expected to attend assessment interviews, held in cramped DWP offices that have not been risk-assessed for Covid-19, according to PCS, the DWP union. As one claimant activist put it, “Universal Credit is the 21st Century workhouse”.

Apart from the pointlessness and danger to claimants being forced to search for non-existent jobs during a pandemic lockdown, the Government is wilfully ignoring mounting evidence accumulated over the last 7 years. Conditionality and benefit sanctions do not encourage people to look for work. If anything, they have the reverse effect. Stopping, or even threatening to stop benefits drives people into anxiety, mental illness, starvation, homelessness, and suicide.

More than two years ago disabled activists took the lead in calling for an end to Universal Credit. Their continued campaigning for its abolition and replacement with a just and equitable welfare system has been led by Disabled People Against the Cuts (DPAC). The original campaign managed to win the wider support of community groups, then Unite the Union, from there to the TUC, before eventually becoming official Labour Party policy under Corbyn’s leadership. A classic example of hard continual lobbying, speaking and demonstrations. The campaign failed when the Labour Party lost the General Election.

Since the election, masses of workers have been affected by the Covid-10 lockdown. Many more are about to face the realities of mass unemployment and get their first experience of Britain’s broken social security system. It’s time to renew the campaign for social justice in welfare: to provide, without discrimination, a guaranteed minimum income for everybody, and the means to gain the skills and knowledge necessary for a socially rewarding life.

DPAC is again taking the lead in a renewed campaign to abolish Universal Credit, by announcing the formation of a national umbrella group, the Stop Universal Credit Alliance (SUCA) . SUCA aims to bring together disabled activists, disabled people’s organisations, union and other allies. The major unions in the TUC are planning a national conference on social security reform. The Labour Party has also recently convened a national forum to look at future options other than Universal Credit.

As anarchist communists, we welcome the growing demand for change, but we encourage workers to learn from the first campaign. Don’t trudge through endless internal political meetings for four years, and don’t rely on party manifestos and elections.

Disabled activist Mike Harrison from Norfolk Against Universal Credit summed it up, telling the Disability News Service “we need a campaign on a similar level to the poll tax movement, a grass roots movement, where every town, every city, every part of the country had a movement to scrap the poll tax, a long campaign but eventually hugely successful. The poll tax was scrapped and that the led the way to getting rid of Thatcher”.

No to conditionality! No to benefit sanctions! Scarp Universal Credit Now!