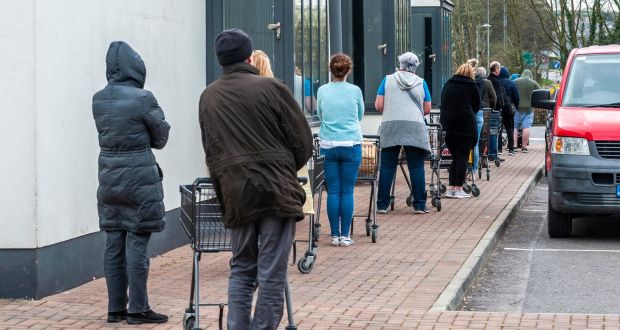 For many in the working class the lockdown has never truly existed, because society relies on our class, many have not been able to stop working, either being forced to work at home or in many cases and more worryingly having to still go to their place of work. Some of these are quite rightly seen as essential jobs however the pay and conditions do not reflect this, while others such as builders who are building office blocks and luxury apartments are clearly only essential to the benefit of the capitalist system.

The contempt our rulers have for these key workers is shown by the proposed public sector pay freeze, and the fact that many of these key workers are paid the minimum wage (grandly and wrongly referred to as a ‘living wage’).

Capitalism always runs on the dead bodies of workers. Right now, we are seeing how willing the Conservatives are to throw more bodies under the wheels of the economy. What is currently happening in care services, social care and hospitals is democide against the working class, the vulnerable, elderly and disabled. Our leaders hope to throw teachers and those who provide support in schools, as well as construction workers (amongst others) back into the virus’s path.

The government is showing its complete contempt for the working class and the vulnerable by asking people to go back to work (or keep going to work) without proper testing, risk assessments having been undertaken, Personal Protective Equipment (PPE) and trace systems in place. It is laughable that the government expects us to have faith that our employers will keep us safe because some voluntary guidance is in place.

Nothing that has happened is surprising. This government, like all of them, is a loyal servant of the ruling class, the bosses. No government has ever put the needs of workers before profit unless the working class is strong enough and organised enough to force them to. No government can ever be trusted.

We shall not waste our breath calling on the government to protect us. We will not appeal to their ‘better nature’, by pointing out it is the elderly, disabled, their carers and families who are most at risk. Given the current level of organisation and combativity in the working class we also do not expect a general strike or widespread and co-ordinated resistance, although we hope to be proven very wrong.

As such we call on workers to do all they can to organise in self-defence. For all their limitations, unions may offer some defence for many at this time and it is worth joining one that is active in your workplace, or if not, an independent union in particular the IWW, IWGB, or, if in London, UVW or CAIWU.

Surviving under capitalism is something every worker must face. We cannot tell individuals the best way to react as we will each have to judge our own personal circumstances and react accordingly. We can however lay out some basic principles about work. However much some individuals might enjoy or find meaning from the labour they do, work under capitalism kills individual initiative and tries to turn thinking, feeling human beings into slaves. All of us who work are being robbed by a parasite ruling class.

No one should ever feel any obligation to their boss or their company, and they especially should not in the current crisis. Employers do not create work or jobs although there is a certain amount of labour that needs to be done to ensure that all people live well and happily. It is those jobs that have really been highlighted by this crisis (i.e. those that are now considered ‘key workers’). All employers do is grant to themselves the right to direct our labour and to organise production in a manner that profits them rather than meets the needs of people. We must revoke this right and take for ourselves the responsibility for organising production and doing so in manner that ensures as little work and as much benefit for all of humanity. That is the economic and political task that faces the working class.

The only way we can genuinely defend ourselves from the abuses of the ruling class is to organise.

Join us in the fight.

One thought on “ACG statement on the lockdown and its easing”