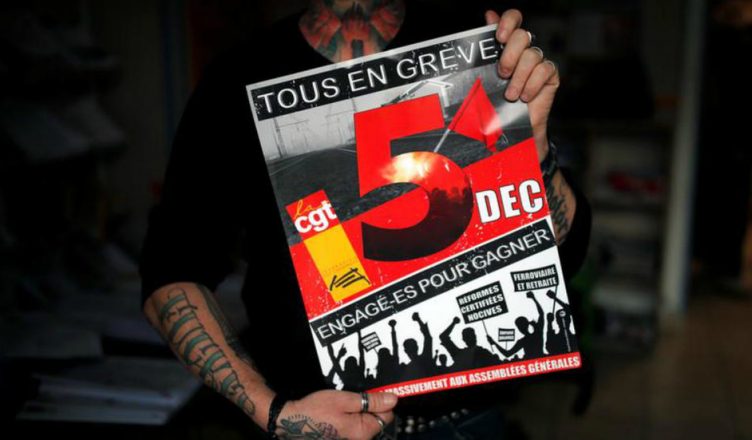 Tomorrow, December 5th, massive strikes will take place in France, against President Macron’s attacks on pensions and his continuing austerity programme. This is why he cut short his visit to the NATO conference in Britain and cancelled his attendance at the COP25 environmental conference in Madrid.

Already wildcat strikes have taken place on the railways in response to the attacks. Under pressure from the steadily increasing anger among workers, students, the unemployed and pensioners, the union bureaucrats are calling for strikes on the railways, the Parisian transport system, among truck drivers, Air France, the health service, education, electricity, firefighters, chemical industry, the ports, and the postal service. Supermarket workers at the Carrefour and Geant Casino chains, restaurant workers at the Hippopotamus chain, and workers at Perrier and Haribo are also set to go on strike.

There is huge support for the strike action among the general population. There is every indication that the country will be paralysed by the actions. In addition both university and high school students and lawyers will be joining the demonstrations on the streets tomorrow. Yellow Vests have also said they will be joining the protests. Strikes starting on the railways will be indefinite and railworkers are determined in their action, angered not just by the attacks on pensions, but by wage cuts and wage freezes and the proposed partial privatisation of rail.

Macron is supremely arrogant. He has seen off the year long protests of the Gilets Jaunes (Yellow Vests) with the use of partial concessions and heavy police repression alongside that. He believes he knows best and at a recent meeting with students in Amiens said that “I get the feeling, listening to us collectively, if you listen to radio or turn on the television, that everything is awful. … Right now our country is, I think, too negative about itself.”

The union leaders will attempt to make the strikes a token one day affair, but already calls are going out to extend the strikes beyond one day, fully supported by libertarian communists and anarchists in France. Workers and students need to develop the strike movement through mass assemblies and grassroots committees and agitate to extend the strike actions.