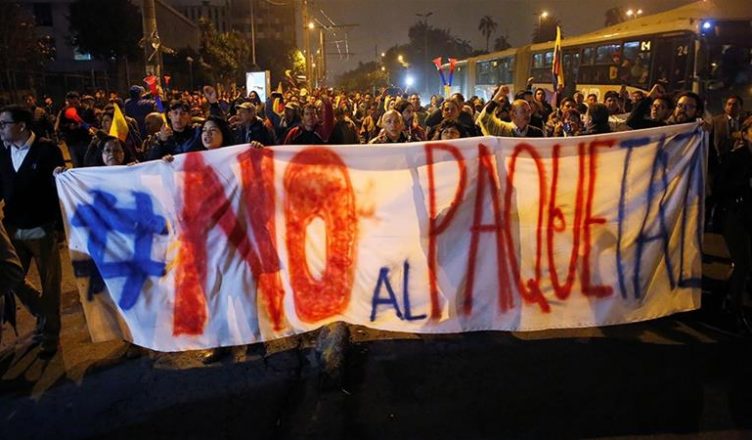 A huge wave of unrest lasting 12 days hit Ecuador in October. The International Monetary Fund had insisted that the government of Lenin Moreno stop fuel subsidies. This followed a $4.2 billion loan agreed by the IMF, with the condition that the Moreno regime install austerity measures. The end of fuel subsidies resulted in a big rise in fuel prices and then in basic goods. This unleashed a tidal wave of popular anger. What was striking about these mobilisations was that they involved a wide front of indigenous peasants, workers, and students. Thousands of indigenous people poured into the capital of Quito. Moreno was forced to flee with his government to the coastal town of Guayaquil and to announce a return of the subsidies.

This was after horrendous attacks on demonstrators by the military and the police, who used rubber bullets and tear gas, ran over protestors with motor cycles, and employed savage beatings. At least five demonstrators have died during the days of unrest. An indigenous leader, Tucumbi, was beaten to death by the police. Thousand gathered at the funeral wake and captured ten cops, forcing four of them to carry the casket of the murdered Tucumbi. In other areas military and police were overwhelmed by protestors and captured.

Oil fields, power plants and government buildings were occupied. Transport workers came out on a general strike and blockaded roads, including the main road to Quito International Airport, causing cancellations of flights. Moreno declared a state of emergency but the combination of indigenous people, workers and youth stopped him in his tracks. Moreno had originally been elected as a Venezuela-style populist leftist and to root out corruption among high officials but he quickly began implementing measures dictated by the IMF. The retreat of the government from Quito to Guayaquil is unprecedented in Ecuadorean history, and indicates the strength of the masses when they are united.