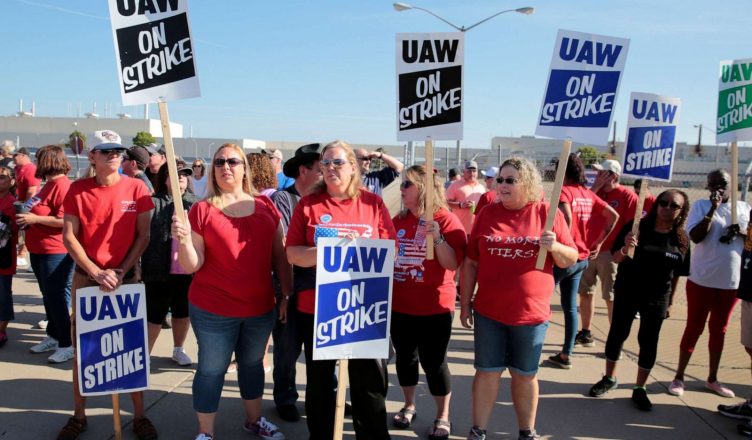 As of October 23rd car workers in the Unites States have been on strike for 38 days. This involves 48,000 workers at 50 General Motors (GM) plants. Demands put forward by the workers included better job security, facilitation of temporary workers getting permanent jobs, better pay and the retention of healthcare benefits. It is the first mass strike by US carworkers in a decade.

The United Automobile Workers (UAW), the union representing many carworkers, agreed a sweetheart deal to help GM recover from the last recession, GM has indeed increased its profits but continues to shut down plants in the USA and move production abroad.

Under increasing anger from workers, the UAW was forced to call for strike action beginning on September 15th. In retaliation, GM withdrew health insurance from 55,000 car workers on September 17th. They rescinded this nine days later under pressure. Truck drivers refused to deliver cars during the strike in solidarity.

On October 16th the UAW and GM announced a new contract which would be put to car workers in a ballot. This new contract is yet another sellout by the UAW leaders. Under the terms of the contract, the Lordstown plant and three other workplaces will still be closed down, the two tier system that discriminates between temporary and permanent workers in terms of pay and benefits is not only retained, but a whole new set of tiers is created. That means GM can hire temporary workers and third party contract workers at will.

The UAW has acted against rank and file workers organising for a No vote. In Spring Hill, Tennessee it called in police against rank and file workers who called for a rejection of the new contract and it is attempting to deprive the rank and file of any control over the running of the ballot. The UAW knows that it faces rejection of the deal at the larger plants, so started the ballot in smaller workplaces. The threatened plant at Lordstown has been put at the end of the ballot process, whilst in the meantime the UAW bureaucrats are trying to put over that there are more Yes votes than No votes in a salami tactics move. It will attempt to rig the vote and sellout the carworkers to the GM bosses.