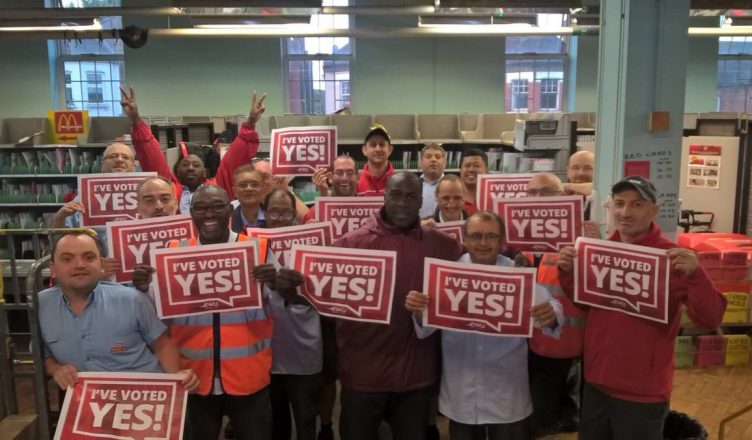 After a massive 97.1% vote for strike action by CWU postal workers , an ACG postie gives a bit of background.

What is the dispute about?

The new Chief Executive, Rico Back, has clearly decided that the way forward for Royal Mail is to have a cheaper more flexible workforce.

This Is why Royal Mail, under his leadership, has developed a strategy which is designed to marginalise the union (CWU) in order to create a cheaper more flexible employment model.

Royal Mail want to review, and possibly change, the legal guarantees which stopped Royal Mail from outsourcing, franchising, breaking up the company, creating a a two-tier workforce as well as stopping Royal Mail from recruiting zero-hour contracts.

Royal Mail want to use PDAs (the machine people sign for their parcels on) to spy on workers and use it as a revision tool (changing duties, job cuts) even though they know PDAs do not truly reflect a postal worker’s duties.

Royal mail are not saying they will support the continuation of the USO (Universal Service Obligation) when Ofcom reviews it next year. This possibly means the USO being cut to a five day service, and resulting in the loss of 20,000 jobs.

(Note: USO – Universal Service Obligation – means royal mail is obliged to deliver and collect mail six days a week at any location in the UK . If the six days is cut to say five, that would mean that the 20 000 staff that cover other posties’ rest days could lose their jobs since all duties would be covered by the regulars. It would also mean a reduction in service for people since mail won’t be delivered six days.)