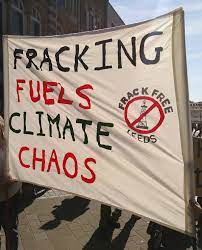 One of the first decisions of the incoming Truss government was to revive plans for fracking in Britain. The moratorium on fracking partly came about through the opposition of environmental groups who protested, obstructed and occupied fracking sites.

Fracking involves high pressure combinations of water, sand and chemicals drilled into the ground to get gas and oil from shale rock.

The Truss regime thinks that this is an answer to the energy crisis set off by the war in Ukraine. Liz Truss has said made the absurd claim that she can “get gas flowing in as soon as six months”.

In 2013 the British Geological Survey claimed that 37.6 trillion cubic metres of gas lay in shale formations in Britain. They were forced to revise this estimate in 2019 to 10% of the original figure.

Every previous fracking drilling in Britain has caused earthquakes, forcing companies to end their operations. Despite the wild claims of fracking enthusiasts, no gas or oil has been provided for homes or industry. UK Onshore Oil and Gas (UKOOG) which represents the oil and gas industries had to admit in 2019 that fracking could only supply 4.7 % of British gas by 2027.

There is widespread opposition in the UK to fracking, with only 4% saying they strongly supported it in a government survey in spring 2022.

Despite the earthquake fears, Jacob Rees-Mogg, the business and energy secretary wants to dispose of the current fracking rules where work has to stop if earth tremors of 0.5 on the Richter scale. He wants to increase this fivefold. He called opposition to fracking “sheer Ludditery” and said “There are millions of seismic events of 2.5 or lower in the world every year, we should not assume every seismic event is the San Francisco earthquake”.

However, local MPs, whatever their party, are not keen to be seen as ruining the countryside and triggering quakes in their own constituencies. The Tory Party will not be united on this issue with several already expressing opposition to the re-introduction of fracking. Far more important than this is the need for the revival of anti-fracking groups and their coordination.

As Professor Jon Gluyas of the Energy Institute of Durham University remarked, ”Could shale gas fracking onshore help “dig” us out of the energy crisis? The short answer is no…It won’t work…we have the wrong kind of shale and geology.”

The Truss government is setting themselves up for opposition on many levels. The fracking issue is another front we can fight them on.