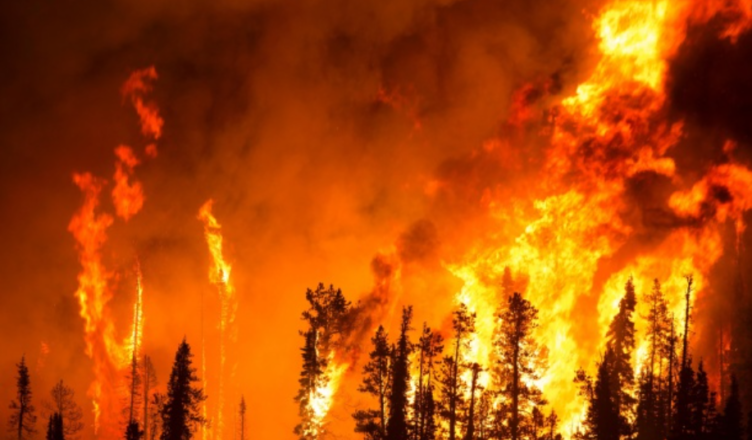 The recent unprecedented 40-degree temperatures ignited fires across tinderbox Britain leading to a nationwide mobilisation of firefighters not seen since the Blitz. In Greater London and Yorkshire every appliance was utilised and forces brought in from outside. Once more our ‘applauded’ key workers rescue us from another capitalist crisis.

Their reward? A derisory 2% pay offer. Rejecting this and now balloting on strike action, the workers of the Fire Brigades Union are rejecting not just the bosses’ contempt for the working class but also capitalism’s climate crisis that has proven why their work is so key.

As outgoing prime minister Boris Johnson praised “the heroic work of firefighters in recent days…”, we must remember it is precisely capitalism’s indifference that has got us here. The government’s response could be likened to the Titanic when warned of an iceberg; deciding to rearrange the deck chairs rather than change course.

Instead of fessing up to the disastrous consequences of three centuries of exponential capitalist plundering, insisting we urgently reverse engines now, they talk of adjustments, getting used to it, building colonnaded walkways and painting rail lines white. As if the crisis screaming at humanity is one of aesthetics or inconvenience.

The recent unprecedented British weather is part of the worldwide phenomena of heatwaves leading to destruction of agricultural land through drought and deforestation through fire. Even the smartest Flat Earther would have to blush denying not just climate change, but climate change driven by human activity.

The shocking truth is that global warming and soaring temperatures are no crisis for planet Earth, just its species, and specifically that species which has caused the problem. In its 4.5 billion years, the planet has alternately spent millions of years being a ball of fire and millions of years being a ball of ice. It continued, with life coming and going, and coming again.

Climate historians now assert Earth is at its hottest since before our emergence onto it as Homo Sapiens around 100,000 years ago. Coincidence? Or something a little more sinister? In the comparative blink of an eye of planetary existence that has included us, our history has so changed the physical and climatic structure of the whole planet that it now warrants its own distinct geological term: Anthropocene.

As a species this should be a great triumph. Our ability to consciously apply our labour to the material world around us. Not just to survive, but thrive in the cultivation of abundance and the abolition of scarcity through our hands and intellect.

Humanity is not new to sustainable community and society, but our developmental and technological capacity to achieve this beyond subsistence and survival with the conquest of thirst, hunger and disease, has been with us for more than a century. So why do we continue to starve and burn?

A spectre is haunting humanity, the spectre of capitalism. It cannot help its fundamental nature which, in addition to ruthless exploitation of everything that moves or doesn’t move, requires a myriad of light and heavy-handed tools of oppression to sustain it. It does so amorally and without judgement, but compulsively, relentlessly and remorselessly. Breaking from the common community of humankind through crippling greed, it devours and wrecks without reflection or repentance. Its drive is self-enrichment and the power it brings, it’s benefits, incidental.

The science of climate change is far from new, it is at least as old as the modern forces of capitalist production. Having already killed millions over a century of crowded, rat infested, disease filled workers’ barracks, dangerous and inhuman production practices, famine or war , it was first alerted to the danger of the ‘Greenhouse effect’ of carbon release in a seminal report by Swedish scientist Svante Arrhenius in 1896.

It took nearly a century for environmental concerns and science to gain bandwidth within the public mind, largely to face derision and attack by the short-termist profit mongers in power. Famously caricatured by Ronald Reagan’s Secretary of State for the Interior James G Watt, proclaiming “a forest is merely an un-rationalised armchair.”

It’s not that they don’t care, it’s that they really don’t care about the poor, the producers, the working class. The (largely) elderly men in power feather their nests for retirement bunkers, fortress resorts and gated communities, and a control of technology that will end the pesky long term needs of and for workforces.

Older than the science is the revolutionary insight to see what is coming. At the height of the French Revolution in 1792, Jean Paul Marat penned his prophetic warning:

“Don’t be deceived when they tell you things are better now. Even if there’s no poverty to be seen because the poverty’s been hidden. Even if you ever got more wages and could afford to buy more of these new and useless goods which industries foist on you and even if it seems to you that you never had so much, that is only the slogan of those who still have much more than you. Don’t be taken in when they paternally pat you on the shoulder and say that there’s no inequality worth speaking of and no more reason to fight because if you believe them they will be completely in charge in their marble homes and granite banks from which they rob the people of the world under the pretence of bringing them culture. Watch out, for as soon as it pleases them they’ll send you out to protect their gold in wars whose weapons, rapidly developed by servile scientists, will become more and more deadly until they can with a flick of the finger tear a million of you to pieces.”

Two pyres are being built, one for the planet and the other for capitalism. The working class globally is beginning to decide which one to light and which to fight. The choice has never been clearer or more urgent. Victory to the firefighters!