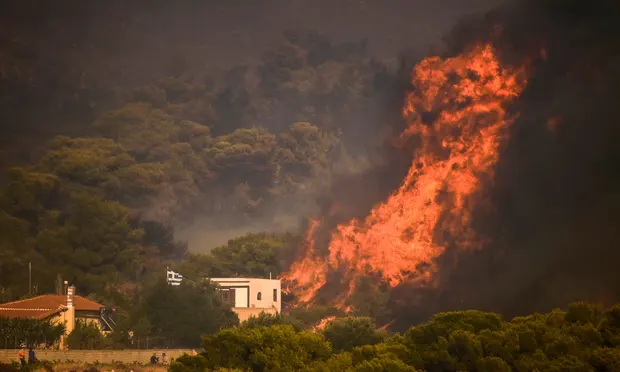 A statement from the Anarchist Federation in Greece on the ongoing wildfires and the disastrous management of the Greek State.

We’re on the cusp of a major environmental and social disaster. Whole regions of Greece are practically disappearing. Tens of thousands of people are losing their livelihoods, losing all perspectives in their own country and are objectively becoming internal refugees. From the fires in Ilia in 2007, the fires in Mati in 2018 to today’s fires, we have the same pattern of destruction, the same data, the same perpetrators, the same criticism.
It’s all said. Everything is known.

But we can’t ignore the fact that the situation right now is on edge. We don’t know what the next day will be like, and that’s literal. We don’t know what will happen tomorrow, in a fortnight, in two months. The disaster we are experiencing right now may be the prelude to what will happen tomorrow or within a month. We can see much worse things, and what’s at stake is the very nature and quality of our lives before they’re even in the hands of patterns and state. We say this having taken into account a number of factors.

1. Extreme weather phenomena will continue and intensify. Climate change, i.e. global warming as a result of capitalist production, is here. And we have every reason to expect that in the coming period there will be conditions conducive to infernos again. Or flooding.
2. The state cannot and will not fulfill its part of the contract in a contracting company. At all levels, he refuses to organize prevention and protection mechanisms or even completely fail to manage the technical part of that treaty. The state cares about its own interests and the only thing its political department cares about fires is the electoral cost in the electoral game. His entire strategy is aimed at protecting yourself, not protecting the social base. We can’t expect anything different in the upcoming fires.
3. The disaster will be followed by a communication party in which the state will deliver some money to the affected people, promise more and once the lights go out, forget the topic. Let us remember that they even ate the massive amount of solidarity money collected by the victims of the Elis fire in 2007. We also have nothing to expect from the State in terms of restoring the immediate needs of those who have lost everything.
4. Despite the enormous destruction that has taken place while writing this, there are still many forests that have not been burned across the country. What happened to Evia, Ilia and Attica could happen to the whole country on a much larger scale in the coming years. Far further away from the capital with more unfavorable conditions.

In light of these facts, we call on the social base in terms of locality, in villages, villages and cities to organize immediately and undertake to the extent possible any initiative to prevent fires and monitoring areas forests in their regions. The ‘run for their lives’ policy that the state has chosen as a strategy is meant to cause massive additional damage and possibly even more victims. Experience in this crisis itself has shown us that it was self-organizing and taking responsibility from the local population that saved what was saved. This needs to be multiplied.

Municipal and political authorities should be taken down the throat to mobilize mechanisms they have and equip self-organized local structures, projects and patrols. Take advantage of the voluntary contribution of non-local people who will come to help. Demand coordination and guidance from firefighters and even fire extinguishers by locals who have the ability and willingness to do so. With safety first, we must not run before we mobilize. Fire protection and forest protection in general must be radically reconfigured according to local communities. Take care of burning areas with the aim not only to regenerate forests but also to expand them.
But the social base must also be mobilized outside of ′′ dangerous areas “. Both for the immediate needs of internally displaced persons and for the political struggle for their rehabilitation immediately afterwards.
And in these disasters as in the past, we have also seen social solidarity manifest massively and spontaneously. We also saw the dynamics of self-organizing, its effectiveness and ingenuity. The different thing now is that the kind of crisis we’ve entered makes these occasional socio-sanitary demonstrations and despair necessary permanently.

We are on our own. And we have, on the one hand, the state and capital drying up while turning our everyday environment into ashes.

We have to take matters into our own hands or we have to settle for unprecedented levels of misery, unprecedented in what we’re not used to. We have to save nature and ourselves from the destructive tide of state and capital.