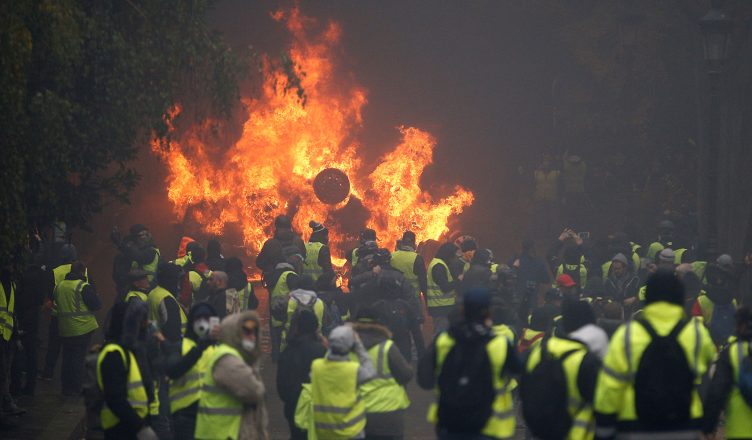 A movement of three hundred thousand, with 3,000 blockades, what is the Gilets Jaunes movement?

The Gilets Jaunes (Yellow Vests) movement emerged in France in November. It got its name from the high visibility tabards that those who take part in the actions wear. It is a movement mobilising around rising taxation, in particular the tax on diesel. It was able to undertake actions in rural areas like the Aveyron department where 2,000 took part in blockades in villages, in small towns like Villefranche de Lauragais where 300 demonstrated and Montgiscard, where 200 came out on the streets. On November 17th more than 300,000 took part in blockades of roundabouts, supermarkets and petrol stations. This action continued on the following two days. However the demonstrations have seen large scale brandishings of the tricolour, the French national flag. Indeed the extreme right is one of the components of the movement, with groups like the monarchist (and anti-Semitic) Action Francaise, the openly fascist GUD, etc. A Muslim woman wearing the veil was forced to take it off by some demonstrators and there were many racist insults against black and Arab people. At one blockade Yellow Vests saw immigrants hiding in a truck and called the police. People perceived as homosexual by these demonstrators were insulted or held up longer in the blockades. These acts are partly attributable to the far-right groups. But, and a big but, in many places there were attempts at self-organisation, with social and ecological demands that went beyond the Macron tax on diesel.

The movement is very mixed, with on one hand, the aggressive waving of the tricolour as already mentioned and on the other, crowds made up of families with their children in a festive mood. Various self-proclaimed spokespeople have come forward to speak on behalf of the Yellow Vests. These have included local bosses, right-wing and far right activists. This shows the attempt by these different interest groups to claim the movement for their own. However, the spreading of blockades then caused the bosses organisations MEDEF and SME to call for the end of these blockades.

The broad slogan of “Ras-Le-Bol Fiscal” (Fed Up With Tax) has united the working class, shopkeepers, craftspeople and employers in a vaguely defined movement. Some transport employers joined the demonstrations because they saw an attack on their profits. The far right quickly participated in the movement followed by different currents of the left and right who did not want to miss the opportunity of taking part in a movement of such size.

All the same, the Yellow Vests movement has given a strong indication of the simmering anger throughout France, a France of precarity and austerity. In particular, that anger is being expressed in what are now rural deserts where transport, health services and schools have been wiped out. It could point to the emergence of new social movements in opposition to the planned attacks by the government. Many pensioners are living under the poverty line whilst the very rich and the shareholders are increasing their wealth.

Unfortunately the uniting of bosses and workers around a common slogan has shown how class consciousness among French workers has been eroded over the last few decades. Anarchists in France must react to the movement with clear ideas about class opposition, and one of the key demands must be the renewing of public transport which will be free of charge.

As the movement developed there was widespread police violence against the Yellow Vests. A concerted police attack on demonstrators at Puy en Velay led them to attack the prefecture (seat of local administration). In Paris, police blocked the Champs-Élysées , using tear gas and water cannons. This caused a dispersal into the surrounding wealthy areas. Windows of luxury stores were attacked with an attempted attack on the Bourse (Stock Exchange). In Martigues and Vichy, the Yellow Vests were joined by workers marching behind union banners, although they were not apparent in other cities and towns. In some areas lorry drivers were willing captives of the blockades and mingled with the Yellow Vests.

One of the new slogans to emerge within the Yellow Vest movement has been for the resignation of Macron, who is seen as a symbol of the arrogant ruling class and as the controller of the recent austerity measures. Macron is now considerably rattled and he and his En Marche party are now looking for leaders of the Yellow Vests to negotiate with. But this movement by its very nature is diffuse and disparate and any such self-styled leaders that emerge will be quickly co-opted by the regime. It is all the more important to carry out revolutionary propaganda within the Yellow Vest movements and to call for general assemblies and mandated delegates than can make fighting co-option, racism , sexism, homophobia and fascism that much easier. As the organisation Alternative Libertaire commented:

“The movement of yellow vests is a real popular revolt, with an obvious class dimension, but whose political colouring depends on local contexts. The worst is next to the best. That the fascist and nationalist leprosy infects several points of the mobilization and flowers in the words of some of the yellow vests is not surprising given the current political context. But to believe that the far right could monopolize a popular struggle of magnitude is an incredible admission of weakness.”