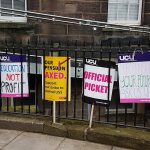 The University and College Union (UCU) has announced that it will be joining other unions, notably the RMT, ASLEF and National Education Union, in striking on February 1st. This follows the announcement that they will be calling 18 days of strikes over the February-March period.

This decision by the Higher Education Committee (HEC), dominated by the UCU Left faction, is a retreat from their previous decision that the union enter all-out indefinite strike action from the start of February following a marking and assessment boycott (MAB) started in mid-January. Following UK-wide branch meetings and a Branch Delegate Meeting (BDM), the HEC retreated from this position when it was obvious that the majority of the union’s membership were not ready for indefinite strike action. The HEC’s original strike plan was also opposed by General Secretary Jo Grady, who prior to the BDM was explicit in that opposition to the HEC’s position, using her position to contact the membership directly. Not only the UCU Left grouping was in favour of indefinite action, but at the BDM it quickly became apparent that the membership were not ready to follow that lead.

The 18 days, then, also came as a shock to many members, who, perhaps expecting the discontinuous action argued for by the General Secretary and the UCU Commons faction to be more spread-out over the next five months, may see the 18 (now 17 days) as an attempt by the HEC to escalate the action as much as they felt they could push it. The MAB action has been pushed back to April.

The reality is that, ultimately, only indefinite action in conjunction with other unions in a generalised mass strike movement is likely to bring any serious gains for Higher Education workers, either in terms of pay and conditions or in the reversal of the mauling of their pensions. But this must be argued for, built for and entered into when it will have the most impact – and not alone.

Whilst the co-ordinated strike action planned for February 1st, which corresponds with the TUC’s pathetic Day of Action protest against the new labour laws, is essentially symbolic (particularly for the UCU, unless it takes rapid subsequent strike action), it at least points to the truth that the present struggles are unlikely to win if they remain isolated. But we cannot wait for the trade union leaderships to come to that conclusion; they are not going to go beyond the symbolic and will play by the established rules of the industrial relations game. If we want to expand and escalate the struggle in Higher Education, as elsewhere, we will need to take control from below with strike committees across workplaces and in neighbourhoods, bringing in increasing numbers in a movement of the class.