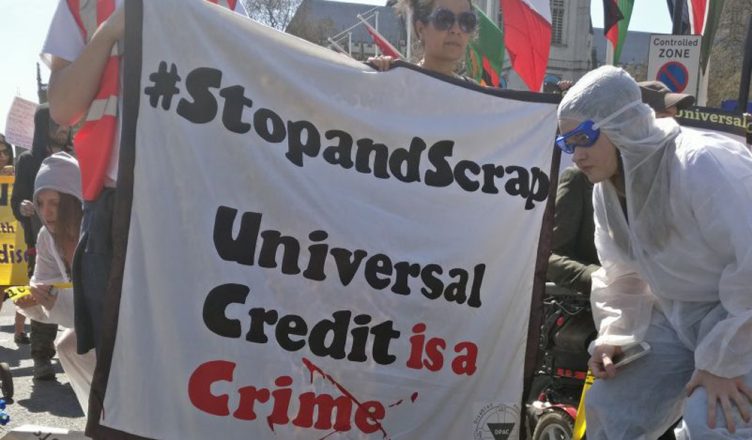 DWP Secretary Amber Rudd is determined to be Boris Johnson’s running mate in the imminent Tory leadership campaign. Her fragile 346 vote majority in Hastings is one problem. Her other problem is her responsibility for Universal Credit and its disastrous impact on working-class households. This in turn is attracting a stream of bad press stories, even in the Mail and the Sun. Not a good look for an ambitious One Nation Tory.

Solution? Suddenly, after years of denial, refusal to release information or allowing journalists to speak to JobCentre staff, the DWP is launching a public relations campaign to persuade the public that Universal Credit is a wondrous and beautiful thing.

A leaked internal memo picked up by DPAC, the Disability News Service and subsequently the Guardian reveals a concerted publicity campaign involving newsprint and TV to “myth-bust the common inaccuracies reported on UC”.

At the end of May, giant ads wrapped around the cover of the Metro freesheet at a cost of £250,000 will be accompanied by a further four-page advertorial feature.  According to the leaked memo “the features won’t look or feel like DWP or UC – you won’t see our branding … We want to grab the readers’ attention and make them wonder who has done this ‘UC uncovered’ investigation.”  This will go on for nine weeks. The Metro has an estimated readership of 2½ million.

Amber Rudd meanwhile will invite selected journalists to JobCentres to see “the great work we do”.  This has already started. Under the headline “I think Universal Credit is great – here’s why’, the Leicester Mercury last week splashed an interview with a job coach team leader at the local Job Centre Plus. The article declares that ‘Living on benefits is not a lifestyle choice’ and repeats the long- discredited myth about intergenerational benefit dependency. When challenged as to why there was no mention of the DWP campaign or the common ownership shared by the Leicester Mercury and the Metro, the reporter in question insisted that it was an interview and not an advertisement.

To cap this publicity campaign BBC2 will be screening a three-part “documentary” which is “looking to intelligently explore UC” by filming inside three jobcentres. It will not be reporter-based – no risk of awkward questions. The leaked DWP memo drools about how this will be a fantastic opportunity and how the DWP has been involved from the start. What’s more, the DWP will see the final product before it’s broadcast. The BBC of course denies this has anything to do with editorial control.

Unfortunately for Amber Rudd the whole publicly funded stunt is starting to unravel.

First the leaked memo blew away any secrecy.  Secondly, if readers’ comments are anything to go by, the press visits to JobCentres are being seen straight away for what they are, undeclared government propaganda. Thirdly, a House of Commons Select Committee has picked up on the leak and has started to ask awkward questions. Due to the “lack of branding” even the Advertising Standards Authority could become involved.

Above all, what do claimants themselves think? DPAC is quite clear.  As reported by the Disability News Service, DPAC has now called on its supporters to visit locations where the free paper is given away – such as train and tube stations – and “remove or otherwise prevent as many as possible” from being read from 31 May.

DPAC is also preparing a dossier of evidence about the DWP-Metro deal to pass to the advertising watchdog, and pledges to “make sure the Metro never want another DWP advert again”.  A spokesperson said: “We refuse to be force-fed government propaganda, so we will put a stop to it ourselves. If they want us to be militant, we will be militant. We are not taking it anymore.