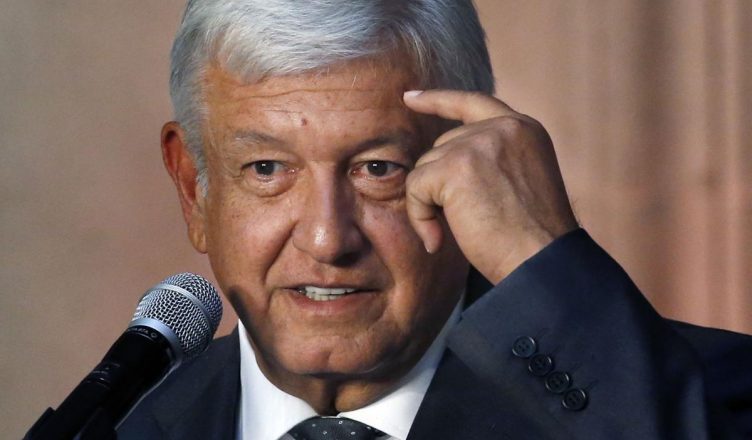 The recent massive victory of Andres Manuel Lopez Obrador who headed up a left populist movement in Mexico was greeted with jubilation by the Left in this country and worldwide.

Obrador is the leader of the left populist Movement For National Regeneration -Morena. He formed an electoral coalition with the Workers Party (PT) and the right wing evangelical Christian grouping, Social Encounter Party (PES).  This coalition is known as AMLO. Perhaps readers might cast their minds back to the election of the leftist Syriza in Greece who were in electoral alliance with the right wing nationalist Independent Greeks (ANEL). Syriza swept into power with massive popular support in the same way as Obrador and his party coalition have done. They then instituted the worst austerity measures, worse than those put through by previous governments. AMLO has a large majority in both houses of the Mexican parliament as well as controlling Mexico City. In addition, AMLO won in five out of the 9 elections for governors of the states that make up Mexico.

In the aftermath of the election Obrador put together a cabinet that was top heavy with politicians from the previous reactionary governments of the Institutional Revolutionary Party (PRI) and the Party for National Action (PAN). AMLO has huge backing among the urban working class and among young voters.

The election came in the context of a Mexico plagued by massive gaps between rich and poor, with “mafias” running rampant. The murder rate is one of the highest in the world, thanks to the ongoing grip these criminal gangs have over the county. Because of worsening conditions in central America, both economic and political, many from states south of Mexico have flooded into Mexico. As a result, the previous right-wing government of Peña Nieto imprisoned 138,000 Central American children in collaboration with the anti-immigrant policies of the Trump regime.

Obrador came to power as a result of the above concerns and the general view that the appalling corruption that grips Mexico needs to be halted.

It might be surprising then to some that members of Obrador’s cabinet included Esteban Moctezuma, a former PRI minister who implemented harsh measures against teachers. In response 80,000 teachers went out on strike only to be sold out by union bureaucrats who then recommended a vote for AMLO. He was also implicated in attacks on the Zapatistas in southern Mexico. Another nasty piece of work in the cabinet is Olga Sanchez Cordero Davila, a strong supporter of the Mexican secret police. Another ex-member of the PRI in the cabinet is Alfonso Durazo who also served with the PAN government of Fox. This law and order merchant in a mirror image of the Trump regime pledges to stop immigrants come across Mexico’s southern border. The economist and World Bank consultant Carlos Urzua is another member of this cabinet who argues against increased spending on social welfare programmes.

But perhaps worst of the lot is Manuel Mondragon, who was responsible for the attack on demonstrators in 2012 which left one dead and many injured.

To their credit the Zapatista National Liberation Army (EZLN) has refused any dialogue with the Obrador government in waiting. They recognise the reactionary nature of this incoming regime, hardly surprising when they recognise faces in the AMLO cabinet who were involved in previous repression against them.

Obrador has already met with employers’ organisations and received their backing. He assured them: “we are not going to impose anything, we are going to argue and convince…. nothing by force, everything by reason and right. We are going to act with a lot of responsibility … We are in a time of reconciliation and national unity.” Whilst before the bosses might have had a few doubts about Obrador, now they have no fears. He will not move against them and it’s business as usual in Mexico.

Obrador was elected on a radical populist groundswell. It remains to be seen how soon those who voted for him will see AMLO for what it is, a movement to demobilise unrest and discontent. Perhaps apart from the Zapatistas, the first will be the teachers, who have engaged in bitter strikes and who are very likely to be the victims of further attacks on their pay and conditions. The election of AMLO repeats the phenomena of Obama, Syriza and Podemos in Spain. The left and extreme left act as cheerleaders for these movements and prepare the working class for more betrayals. With AMLO as with Corbynism, the real alternative is not such electoral cons but the developing of movements preparing for social revolution.