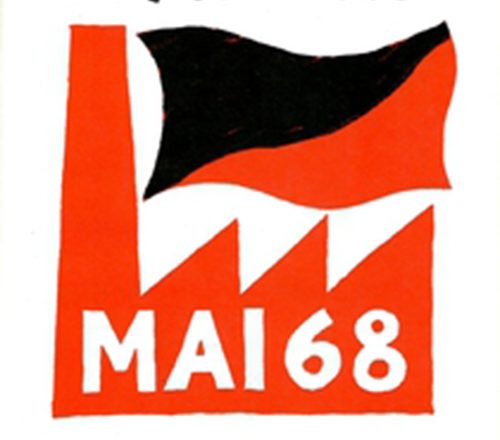 This handy little pamphlet appears in the 50th anniversary year of the events of May-June 1968 that shook France and the world. Importantly, it’s written by an eye-witness and participant in the events, the anonymous Le  Flûtiste  (Flute Player).

First of all, on the outbreak of the fighting in Paris, between 300-400 anarchists were attending the gala of the Federation Anarchiste that evening in central Paris on 10th May.Members of other groups were present on that evening, including the Union of Anarchist Communist Groups, the Anarcho-Syndicalist Union and the anarcho-syndicalist union the CNT.These were on hand to reinforce the barricades that were set up that evening in the Latin Quarter, a culmination of weeks of unrest in the universities. To his credit Dany Cohn-Bendit of the March 22nd student movement used his megaphone to call for the taking over of the area. The writer describes this then anarchist as “hard to stick” as a person(more on that later).

“Get this: what few leftwing or “leftist” students there were on hand tried to talk them of digging up the streets or building barricades and berated the barricade builders as “provocateurs”. They were promptly seen off…”

The writer describes the lightning spread of barricades through the neighbourhood.”The clashes were violent in the extreme; many young people refused to give ground (to the police) and like out-and-out kamikazes, threw themselves into the hand-to-hand fighting”. He also notes that “local residents, outraged by the sight of the police brutality, sided with the students, tossing down buckets of water to dampen the effects of tear gas grenades and taking demonstrators into their homes”.As a result of the fighting and the vicious brutality the trade unions and left wing organisations were forced into calling a demonstration for May 13th. Over the coming days strikes broke out spontaneously around France.

The leftists now attempted tp hijack the movement, setting up literature stalls in the courtyard of Sorbonne university and token committees that they controlled.

The demonstration on May 13th brought out between 500,000 to one million people. The writer notes the “forest of red-and-black flags with a sprinkling of black flags”.