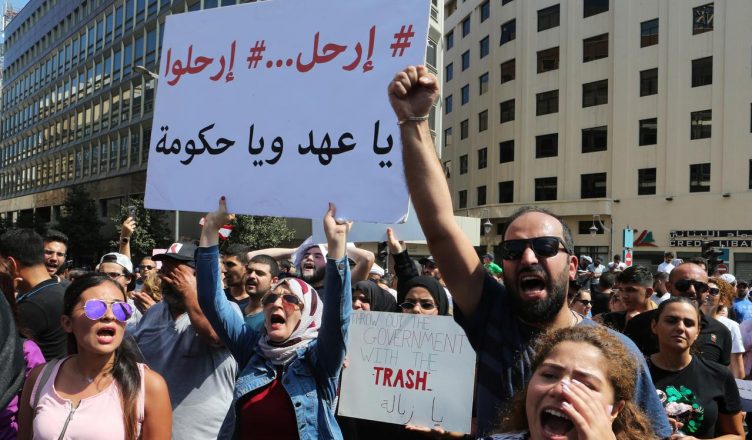 Anger against austerity measures and tax rises in Lebanon erupted recently with five days of unrest which united workers across the various religious divides in a country where 18 different religious groupings are recognised. Youth unemployment runs at 37%, whilst wages remain low and the cost of living soars. Corruption is rampant whilst water and electricity supplies are skeletal. More than 25% of the Lebanese population live below the poverty line.

This has contributed to the number of Lebanese living outside of the country, 14 million as opposed to 6 million who remain. Just 1% own 58% of the wealth. In scenes echoing the disturbances in Chile and Ecuador, workers came out on the streets and demanded the resignation of the government , a coalition led by the Prime Minister Saad Hariri.

Workers blockaded the capital of Beirut and the port town of Tripoli. In Chile it was the metro fare rises that was the last straw, in Lebanon it was the government’s proposal of putting a levy on Whatsapp and similar internet-based telephone services, in a country where telephone charges are some of the highest in the world.

As elsewhere in the world, the Hariri government called out the police who brutally attacked the crowds with water cannon and tear gas. This resulted in many injuries among protestors. The government was able to mobilise large numbers of police against the protests, but days before were unable to control the forest fires that raged in 100 places.

On the second day of the protests, there were calls for the resignation of the entire government. Slogans chanted included “Revolution, revolution” and “We are one people united against the State”. Four ministers resigned and Hariri was forced to back down on tax rises. A general strike was then declared on 21st October and the government were forced to put forward a budget halving politicians salaries and benefits and forcing both the central state bank and private banks to contribute to the budgetary deficit.

The Hariri coalition is kept in power by the Hezbollah Shiite militia and its leader gave support to Hariri during the unrest. However the Lebanese masses are registering their rejection of this and are threatening the overthrow of the whole rotten elite running Lebanon, be they Shiite, Christian or Druze.