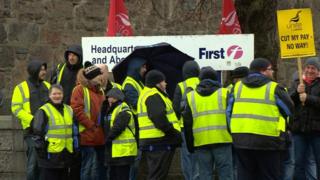 250 Aberdeen bus drivers went out on strike on Friday March 17th and Monday March 19th and on Wednesday 21st at a mass meeting decided by 95 per cent to take strike action of up to four weeks. This will start on April 6th.

They are taking action against imposed contracts by the firm Bus First that will rob them of holidays, slash benefits and make them work longer hours. Striking university lecturers have already shown solidarity by attended pickets at the bus depot.

Some 250 Unite union members are taking action because bosses are trying to force them to sign new contracts on 1 April or lose their jobs.