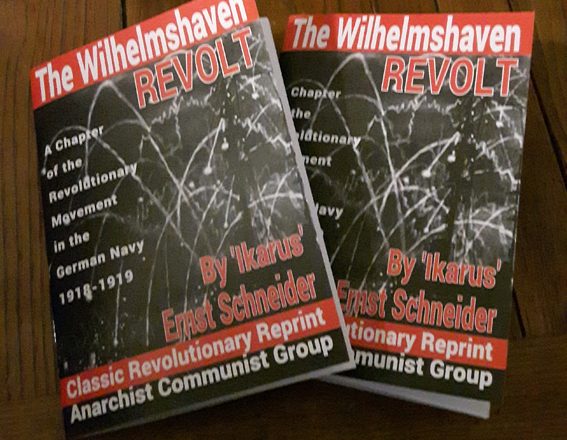 Commentators and history teachers usually offer an easy explanation for how World War One started in 1914, but explanations of how the war ended in 1918 is something that is rarely talked about. And when it is talked about, it’s little more than a vague mention of some bunch of generals and politicians signing the armistice in a train carriage in a French forest.

And there’s good reason the establishment rarely publicises what actually brought an end to the carnage of the first world war. This is because hostilities were finally halted by revolutionary sailors, soldiers and workers in Germany, who rose up in 1918.

If you want to find out more, read:

The Wilhelmshaven Revolt: a Chapter of the Revolutionary Movement in the German Navy 1918-1919 by ‘Ikarus’ (Ernst Schneider), an ACG Classic Revolutionary Reprint

Republished by the ACG in the centenary year of the ending of World War 1, this pamphlet looks at a lesser known moment in revolutionary working class history which took place at that time. The events in Germany during 1918-1919 were arguably an example of our class at its most revolutionary.

Written from the viewpoint of someone involved in those revolutionary events, The Wilhelmshaven Revolt is an inspiring read, particularly in this current period of low class-consciousness and generally low working class activity. It not only shows us what is possible but what to avoid, namely, trust in reformist politicians and those who seek to act in the name of the working class with statist and Leninist “solutions”.

If overseas, drop us a line to ask about any extra postage costs.

Or you can order it straight from our ACG Shop