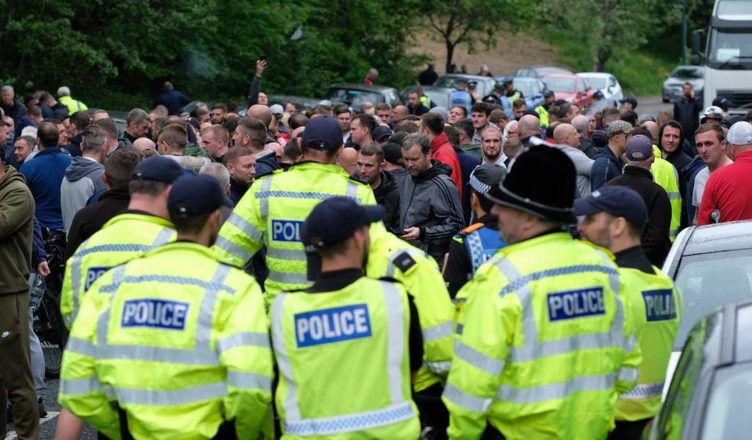 Workers go on strike due to unsafe working conditions. The State responds with a heavy police presence finally sending in the riot cops.

Striking MGT Power workers have been picketing the entrance to Teesport, on the A66, since Thursday 30th May. It is not the first time workers have walked out over safety issues, blocking the same road and stopping traffic on the A66.

Hundreds of protestors said in November that “nobody wanted to walk off site” but they claim their safety has been put at risk, and that action was only taken after repeated and lengthy discussions with management failed.

Workers walked out on Thursday, complaining of poor safety conditions on site sparked by an incident involving a boiler. According to the company, MGT Teesside, the incident involved a boiler where a suspended load unexpectedly moved during installation. No-one was injured and the area was quarantined and as a further precaution all workers within the boiler were relocated to their mess cabins.

Tensions rose on the picket line as striking MGT Power workers and police reacted during a second day of protest. On Friday initially the cops put on a huge display, allowed protesters to remain in the road but by mid-morning, police attempted to move protesters off the road to allow queuing HGVs to pass to their destinations.

The move flared tempers and unleashed shouts from a packed crowd at least 20 bodies deep. As police started to move the crowd, the situation became further inflamed as workers pushed back. The protests eventually broke up with the workers promising to come back on Monday.

On Monday a huge police presence including riot cops was called in as A66 protests continued. The action was briefly called off at around 9.30am but resumed at 11am after unsuccessful talks between workers and management.

The resumption of the protest was met with a show of strength by police as a large number of officers descended on the site, including a significant number in riot gear. The police helicopter was also used as part of the operation to move protesters. The road was reopened again shortly after 12pm. Workers eventually left the site just before 1pm but pledged to resume the protest at 6am on Tuesday.

A spokesman for MGT said: “It is very sad that we now have yet another unofficial industrial action on the project without any of the procedures of the Blue Book contract having been followed”. The Blue Book is an official agreement with the unions. It is unclear what this agreement actually states but workers are obviously not happy with it and are having to undertake “unofficial” industrial action.

The use of Riot Police by the state to support the bosses shows that both the state and the bosses do not care about workers safety and rights. But as North East Anarchist Group rightly say:

The State’s purpose, and thus the police’s, is to control us. To ensure that capitalism continues to function unhindered and protect the interests of the ruling class, allowing them to retain its dominant position over us… The cops aren’t your friend and neither is your boss. We only have each other.